The erudite lawyer revealed that he and the suspect took the trending photograph eight years ago, precisely in 2011 at a burial ceremony. 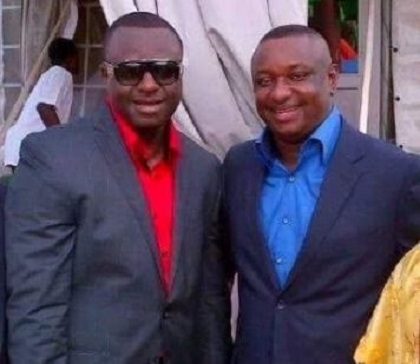 The Minister of State for Niger Delta Affairs, Festus Keyamo (SAN), has been linked with Jerry Elo Ikogho, one of the 78 Nigerians indicted in cases of massive financial fraud recently uncovered by the American agency, the Federal Bureau of Investigation.

A photograph of the minister sharing happy times with FBI-indicted Jerry Elo Ikogho, aka J Man, surfaced on the social media on Sunday and it became an instant hit.

Mid last week, the American-owned domestic intelligence and security service had rounded up 80 indicted Internet scammers, out of which 78 are Nigerians.

While some of the indicted persons live in the United States, the FBI charge sheet said the majority of them live in Nigeria.

The FBI went on to release their full names and aliases, along with a 252-count outlined in a 145-page document.

According to TheCable, Mr. Keyamo has confirmed that he was friends with Mr. Ikogho.

The online medium reported that Keyamo said he and Ikogho were born in Ughelli, Delta State, and that they grew up as childhood friends.

It added that the erudite lawyer revealed that he and J Man took the trending photograph eight years ago, precisely in 2011 at a burial ceremony.

The medium added, “The senior advocate said the suspect is from a decent home,” adding that he hoped that the American authorities got their facts right.

“He is my childhood friend. We were born in the same town, Ughelli.

“We attended the same church from birth. His parents and mine, best of friends, till tomorrow.

“Can’t deny him. It’s a family relationship from birth. He’s from a decent family. Hope they got their facts right. The wife has sent the charge to me,” TheCable quoted Keyamo as having said.
Top Stories