Thomas Tuchel's men, who lost at Rennes last time out, have seen the start of their season dominated by the Neymar transfer saga. 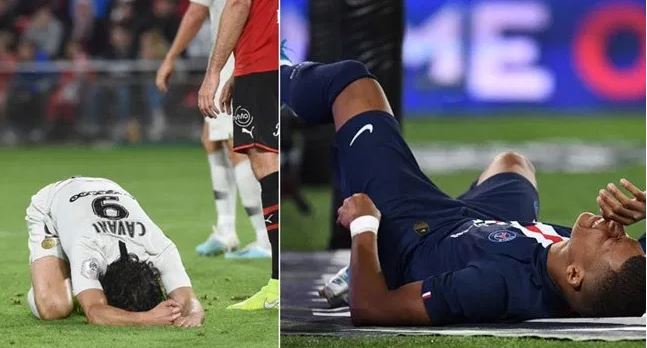 Edinson Cavani and Kylian Mbappe
Paris Saint-Germain lost star strikers Edinson Cavani and Kylian Mbappe to injuries on Sunday as the French champions’ problems continued to mount despite a 4-0 thrashing of Toulouse.
Thomas Tuchel’s men, who lost at Rennes last time out, have seen the start of their season dominated by the Neymar transfer saga.
The Brazilian was once again left out of the matchday squad at the Parc des Princes amid rumours of a move to Real Madrid or return to Barcelona, and Tuchel saw his strikeforce totally dismantled as Cavani and Mbappe both hobbled off — as did centre-back Abdou Diallo.
Eric Maxim Choupo-Moting scored a second-half double, but only after coming on as a substitute for the injured Cavani, while Mbappe also departed the scene after appearing to pull up with a hamstring injury following a trademark burst into the box.
The capital-city giants sit three points behind early Ligue 1 pace-setters Rennes, who made it three wins from three by beating Strasbourg 2-0.
Top Stories

'Buhari Is Fake' - Die-hard Fan Of The President Apologizes To Nigerians, Begs For Forgiveness