Iro, 31, and Chukwudi Christogunus Igbokwe, 38, were named as lead suspects in a large-scale fraud case. 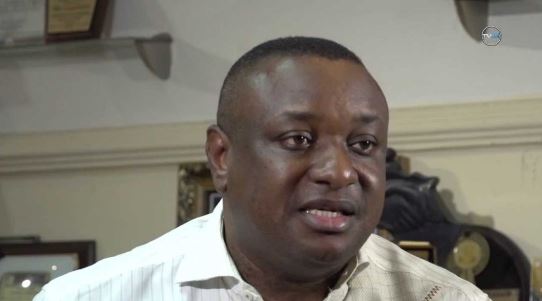 Festus Keyamo
Paul Ibe, a Senior Adviser to the presidential candidate to the Peoples Democratic Party, PDP, Alhaji Atiku Abubakar, has called for the suspension of Festus Keyamo as Minister of State for Niger Delta Affairs.
Ibe said this in a reaction to trending photos where the newly appointed Minister posed with a suspected fraudster, Ikogho.
The FBI released full details and identities of 80 suspected fraudsters, with many being Nigerians, arrested in the United States on Thursday.
Iro, 31, and Chukwudi Christogunus Igbokwe, 38, were named as lead suspects.
The duo allegedly coordinated with others, to launder the funds from victims.
Jerry Elo Ikogho was among the 77 Nigerians arrested last week for online fraud. He is number three on the 77-man list.
Keyamo had in reaction to the viral picture said himself and Ikogho grew up as friends and he wouldn’t deny alliance with him, adding that the picture was taken in 2011.
But in reaction on Monday, Ibe tweeted, “Festus Keyamo (SAN), Niger Delta Minister of State and former EFCC Prosecutor is linked to Jerry Elo Ikogho also known as J Man, Number 3 on the FBI Fraud List of 77.
“As was the case with Babachir and Obono-Obla, Keyamo should be suspended for unfettered investigations.”
Top Stories