The Nigerian police officer who beat up a university student and left her bloody-eyed has been arrested. 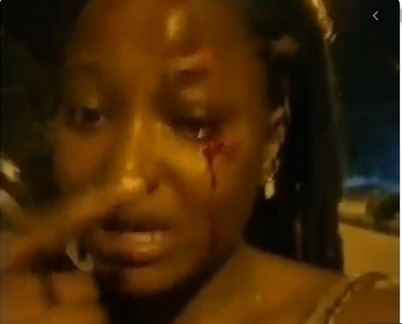 The student was beaten
According to Punch Metro, the Ondo State Police Command on Tuesday said it had arrested one of its men, who allegedly beat and injured a female student of the Federal University of Technology, Akure.

Some students of the institution were said to have had an encounter with some policemen attached to the ‘A’ Division Police Station, Akure, Ondo State capital, on Sunday night leading to one of them being injured by a policeman.

The identities of the victim and that of the policeman had not been revealed as of the time of filing this report. Video of the encounter had already gone viral on social media.
In the viral video, a young woman ( FUTA student) was seen with one of her eyes bleeding and she kept saying, “Look at my eyes.”

When contacted on the development, the Police Public Relations Officer Mr Femi Joseph, confirmed the incident and said the erring police officer had been arrested and would face trial.

Joseph, who declined to reveal the identity of the cop, however, explained that the matter involved two students, who were on a motorcycle and were drunk on Sunday night.

He said that the students refused to be checked by the policemen, who were on patrol.

He said, “The students were stopped by the policemen on patrol on Sunday night, and when they were asked to open the bag they held, they refused, that was what caused an argument between them, leading to one of them to slightly push the lady. But because the lady was drunk, she fell down and got injured.

“In spite of that, as I am speaking with you now, the policeman in question has been arrested and will face trial today ( Tuesday). He would definitely be punished. ”

The President of the FUTA Student Union Government, Abraham Esedere, said he was at the police headquarters over the matter and promised to call back.

“I’m at the police headquarters, I will call you back after I leave here,” he told our correspondent on the telephone.
Top Stories