At least 55 persons were injured and two killed after a Dangote truck crushed a BRT bus in Lagos. 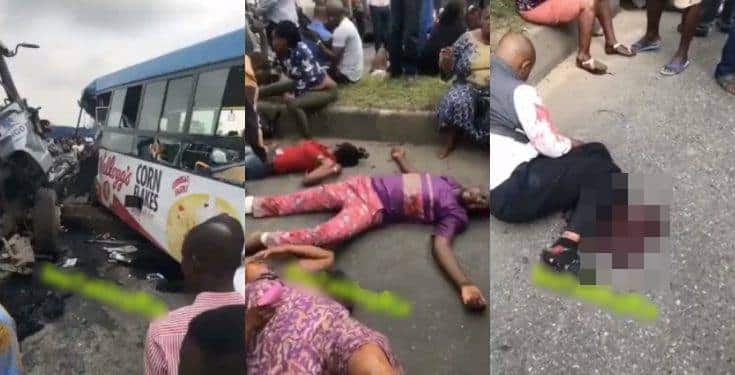 Scene of the accident
Two employees of Primero and a female passenger were killed on Tuesday morning after a Dangote truck rammed into a Bus Rapid Transport (BRT) at Majidun in Ikorodu, according to a report by TheNation.
Over 55 other passengers were said to have sustained varying injuries while the BRT driver was allegedly unconscious and his leg decapitated.
It was gathered that the cement-laden truck had a brake failure and suddenly skidded into the BRT lane crushing an oncoming mass transit bus with registration number LSR228XS.
The BRT, it was gathered had a total of 60 passengers on board with 20 of them standing.
Announcing the death of his workers, Primero boss Fola Tinubu said there was nothing the BRT driver could do as the truck jumped from his lane and hit the bus head-on.
He said: “A Dangote truck jumped from the regular lane on to the BRT lane and hit our bus head-on. There was nothing our driver could do to prevent the accident.
“Unfortunately, we lost two of our staff and one passenger in the accident. We are working with the authorities to apprehend the truck driver.
“Right now our thoughts and prayers are with the families and friends of the deceased and we are praying for full recovery for the injured.
“All our vehicles are fully insured and our passengers are also insured but that will not bring back the dead. I pray for God to grant the deceased souls eternal rest and we’ll continue to investigate the accident.”
According to the Chief Executive Officer (CEO) Lagos State Emergency Management Agency (LASEMA) Dr. Olufemi Oke-Osayintolu only one mortality was recorded in the accident.
He said the bus was carrying 40 seated and 20 standing passengers, adding that all the passengers on board suffered injuries.
“All passengers on board suffered various degrees of injuries with one female passenger losing her life. The driver suffered severe life threatening injuries with his leg totally decapitated.
“The combined efforts of the agency’s assets (Medical Unit, Tiger unit, Papa Eagle and Cobra unit) are on ground working alongside LNSC, Police, FRSC and LASTMA to ease vehicular movement and ensure a swift recovery of the accidented truck. Recovery operation is ongoing,” he said.
Watch video below: