Revealed: You Won't Believe The Amount Of Bribes Nigerians Pay Every Year


The amount of bribes Nigerians pay every year has been revealed and you will be stunned by the figure. 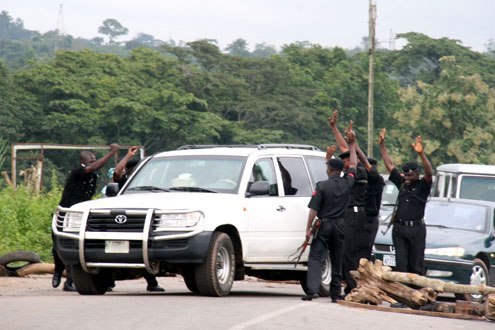 File photo
According to Premium Times, an official of the Independent Corrupt Practices and other related offences Commission (ICPC) said Nigerians pay an estimated N400bn annually as bribes to obtain public services.

The Principal Investigator at the Anti-Corruption Academy of Nigeria (ACAN), the research and training arm of ICPC, Suleiman Suleiman, said this on Tuesday.

He spoke at the stakeholders meeting on Nigeria Corruption Index (NCI), and presentation of a policy brief on Eradication of Electoral Corruption Awareness Survey in Abuja.

Mr Suleiman, who is also a research fellow at ACAN, said 32.3 per cent of Nigerian service users pay a bribe across key sectors/services and regions.

He quoted the PricewaterhouseCoopers (PWC) 2016 data that estimated that corruption will wipe off 37 per cent of Nigeria’s GDP by 2030.

He further quoted PWC findings that Nigeria’s GDP would rise as high as $534 billion if it reduces corruption to a minimal level.

According to him, many Nigerians do not have any direct contact with many public institutions where a lot of corruption occurs.

The latest Nigerian Gross Domestic Product (GDP) report by the National Bureau of Statistics shows that the Nigerian economy grew by 2.01 per cent (year-on-year) in real terms.

”In 2016, PWC conducted research with the aims of finding what Nigeria’s GDP would be by 2030. Based on their forecast they discovered that Nigeria GDP would be around $1,457billion.

”Also, they wanted to know what would be the cost of corruption during that period. That is, if they did the research in 2015, that is 15 years ahead. They found that if Nigeria is able to reduce corruption by that 2030, it would even be higher than that $1457 billion by up to $534 billion.

”It is like saying if you spend money unwisely you would have N20 but when the money is spent carefully, you would have N35. So the figure of $534billion is what Nigeria can have if we reduce corruption.

”The PWC found that 32. 3 per cent of service users are asked to pay a bribe, which is quite high. If the average bribe is N5,300 and you have up to 83 million bribes a year, multiplied by N5,300 and it gives you 4000billion,” Mr Suleiman explained.

Corruption is endemic in Africa with more than one in four people across 35 African countries paying bribes in 2018 to access public resources, a 2018 report by Transparency International said.

According to the TI reports, out of the 35 countries surveyed, more than half of all African citizens think corruption is getting worse in their countries, with 59 per cent of people thinking their government is doing badly at tackling corruption.

Sola Akinrinade, a professor, and former Vice-chancellor of Osun State University who is the provost of ACAN, said the commission was working with other agencies of government to fight corruption in public service.

He said lack of accountability remains a major concern in many states in Nigeria.

”We are working with other agencies of government who can help us to implement the findings and outcomes; which can also lead to preventive measures that we have the statutory power to focus on.

”So if we find out that one sector is very vulnerable we can take steps to give directives that … certain thing should change there. We have the power to do that.”

The second is the policy reforms, it would help us to look at existing government policies that are designed to challenge corruption but are not working well right now.”
Top Stories