Shocking! Grandmother Goes Into Coma After Being Flogged By DPO In Edo (Video)


An old woman has reportedly gone into coma after she was flogged by a Divisional Police Officer. 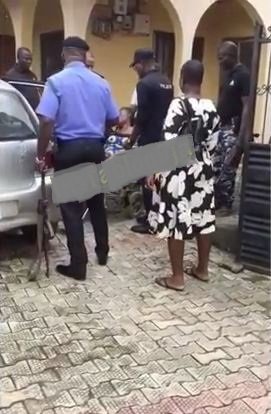 The woman is in coma
It has been reported that a grandmother, identified as Mrs Bisi Ogedegbe, is currently lying unconscious in a hospital in Benin, Edo State, after being assaulted with a belt by a DPO in the State.

Giving an account of how it happened, her son said:
"My mom is critically unconscious in the hospital after the DPO of a police station in Benin flogged her with his belt.

"It all started when my younger sister was driving through the police station this morning and some policemen stopped her and asked for the documents of the car which she presented to them.

"After seeing the documents they told her they would seize it till her husband comes to the station because he is wanted. They took her to their station at Ugbor and detained her and her 1-year-old son.

"She immediately called my mom who went there to solicit for her. My mom demanded to know what she had done and the officers directed her to the DPO's office.

"When she got there, she started to beg the man to let her go that she did nothing wrong. The DPO insisted that he won't talk to her and she was still begging when he pulled his belt and floged her till she fell on the floor and started crying for help.

"Now she has been rushed to hospital by the same DPO who assaulted her. Two different hospital rejected her until the 3rd one, Samomen's Medical Centre, admitted her and place her on drips.

"You can see the belt he used to flog her on the table. My younger sister was detained behind bars for even making the videos of my mom. This is the DPO who did all this. We are trying to get justice. She has now been transferred to the police clinic in Benin."
Watch the videos of the woman below.