A former South American football boss who was involved in a FIFA scandal has been reported have died. 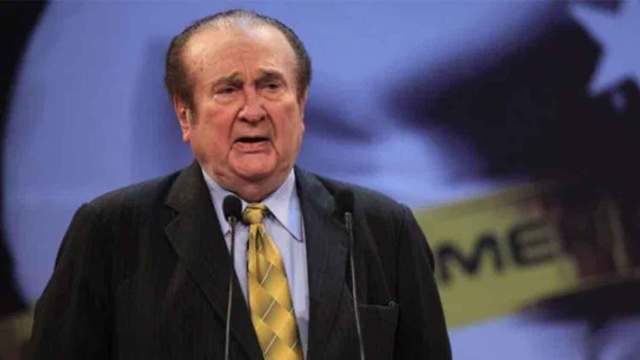 Nicolas Leoz
Nicolás Leoz, a long-time South American soccer executive and FIFA official who had been under house arrest in Paraguay fighting extradition to the United States, has died. He was 90, the Associated Press reports.

Leoz, under house arrest for the last four years, was indicted in 2015 in the U.S. Justice Department’s sweeping investigation of bribery and financial corruption linked to broadcasting and sponsorship rights for soccer competitions, including the Copa Libertadores.

South American soccer body CONMEBOL announced Leoz’s death on Twitter. Leoz had served as president of the Paraguay-based organization from 1986-2013.

One of Leoz’s achievements as CONMEBOL president was to gain diplomatic immunity for its headquarters in Asunción as protection from prosecution.
Leoz resigned from CONMEBOL and his FIFA executive committee seat in 2013 before the FIFA ethics committee could punish him following long-standing allegations he took kickbacks from World Cup revenues.

Leoz received hundreds of thousands of dollars from Swiss-based marketing agency ISL, which was selling World Cup television rights. ISL’s collapse into bankruptcy in 2001 provoked a financial crisis for FIFA and led to a criminal trial in Switzerland.
Top Stories