BBNaija: 'You Are Still Leaving On Sunday' - Nigerians React As Esther Kisses Frodd


Big Brother had also warned Frodd for attempting to touch Esther against her will on Saturday night. 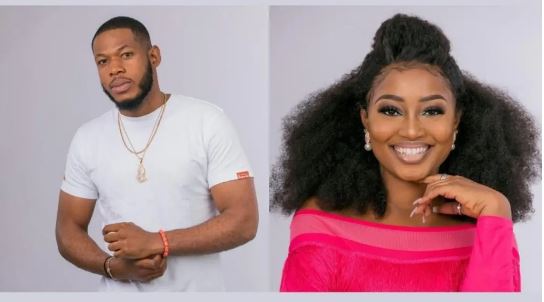 Frodd and Esther
A cross-section of Nigerians have reacted to the passionate kiss shared between Big Brother Naija, BBNaija, housemates, Frodd and Esther.
This is as Esther on Wednesday night suddenly kissed Frodd.
Esther, who had severally turned down Frodd, kissed him during their presentation on Wednesday.
DAILY POST recalls that Esther had earlier turned down Frodd’s proposal which pushed him to tears.
Big Brother had also warned Frodd for attempting to touch Esther against her will on Saturday night.
Esther’s kiss has since stirred reactions from Nigerians on social media, who took her move towards Frodd as a strategy to gain votes from viewers to avoid eviction on Sunday.
Here are some comments gathered by DAILY POST from Twitter:
@JazWizhova “Esther is just trying to sell herself so people will find her interesting and want her to stay in the house more.“
@Delgado_nicki “Frodd won’t brush his teeth anymore. Local man is in heaven. Esther have killed Frodd o.”
@Ironlad4424 “Esther we cannot be fooled. try harder oo. Kissing frodd cos of eviction.”
@Tes_sie1 “Esther just kissed frodd lol that nigga will go home on Sunday feeling fulfilled.”
@Ironlady “Esther is just so desperate because of eviction. Wooooow. But by Gods grace come Sunday, she will leave. Frodd needs to focus on his game.”
@Blaq_steve “Esther kissed Frodd. We haven’t changed our mind, you are leaving on sunday.”
@PhapiV “Esther kisses Frodd at last.You know what ? Persistence is power.”
@Suremax5 “Frodd doesn’t care about the win but the kiss, I’m sure he is going to pay with his blood for that kiss.”
@Nicki_Delgado “Esther will regret why she kissed Frodd and they ended up not winning. Frodd about to wash pant tonight.”
@Bliz_Rita “At least frood won something. THE KISS.”
Top Stories