A female armed robber has been apprehended by security operatives during a robbery incident. 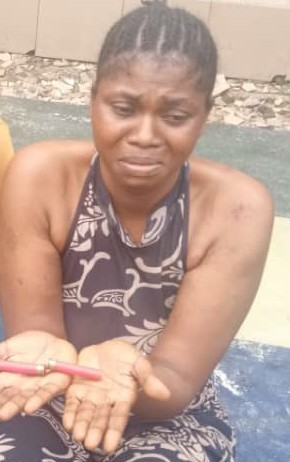 Miss Yetunde
A 28-year old female robbery suspect, Miss Yetunde Lawson, has revealed how she joined a 5-man robbery gang and became a full time armed robber in Lagos in order to make money with her male colleagues.
According to a report by PM Express, Yetunde confessed that she had followed her gang to various robbery operations at night after she received intensive training and her gang upgraded by buying weapons, which gave her more confidence during robbery operations.
She also revealed that they used to be traffic robbers, operating at various bus stops in the State but when they upgraded, bought guns, they became full time armed robbers and terrorised people.
Yetunde explained that they knew that Mushin area was a risky zone for robbers but for any gang to be recognized in armed banditry, such gang must carry out operations in Mushin and other areas in the State.
However, the decision has landed Yetunde and her gang in trouble because of the strategy adopted by the Police in the area, which not only repelled their operations in the area but two members of the gang were arrested including her.
The Police operatives at Olosun Division led by their Divisional Police Officer, SP Ayodele Arogbo, smashed a robbery gang terrorising the residents of Mushin, Ikotun and Igando areas of Lagos during an operation.
The Police arrested two members of the robbery syndicate and recovered weapons during the operation at Olorunsogo Bus Stop in Mushin while they were on their way with motorcycles for operations at night. The suspects had been transferred to FSARS for discreet investigation and will be charged to Court.
Top Stories