How Police Killed And Framed Our Sons - Families Lament


Following the unfortunate death of two young men shot dead by Police, the families have threatened to sue the Police. 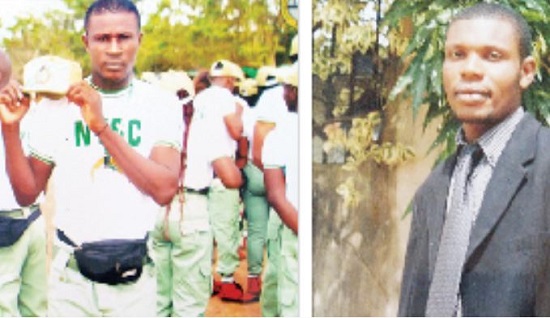 The families of Ayodele Solaja, 29, and Ogheneovo Ebolbo, 36, who were shot dead by four policemen from the Adoff Police Station on the LASU-Iyana Iba-Isheri Road in Lagos State, have called for the dismissal of the Divisional Police Officer in charge of the station.

They also called for the redeployment of the state Commissioner of Police, Zubairu Muazu, for incompetence, noting that extrajudicial killings by the police in the state had reached an alarming proportion since he assumed of office.

Ayodele’s sister, Seun, claimed that the graduate of International Relations from the Estam University, Benin Republic, who also bagged a Master’s degree from a university in France, returned to Nigeria for his national youth service programme, adding that he was serving in Kogi State.

Seun said the policeman, Fabiyi Omomuyiwa, aka Omo, who allegedly shot her brother dead, was well known to people in the area.

She stated, “Ayodele received a phone call from his friend and told me that he had to see him before returning to Kogi State on Tuesday, August 13. He came to Lagos for the Eid-el-Kabir holidays.

“So, we went out together. In the evening when I returned, he wasn’t in his room and he never stayed out beyond 7pm. I became worried and called his phone several times and it indicated that it was switched off.

“I waited for a while and went outside to ask neighbours if they saw him. They told me that the police shot him at the Adoff Police Station. I left for the station at once. I saw a policeman, who is known to us, people call him Inspector Mo, but some call him Omo.

“I told him that I was looking for Ayodele Solaja and that people told me that he was shot at the station. He confirmed the news and said they took him to hospital, adding that on their way back after bullets had been removed from his and the other man’s bodies, they both ran away.

“The next thing the man told me was that he would shoot me if I didn’t leave the station. He said he had told me the truth that my brother had run away. That was how I left the station.

“On Tuesday, I went back there with my dad and relations to ask where they kept Ayodele. Inspector Omomuyiwa said he had told me the truth. After about three hours, we saw the footage of my brother and his friend being shot by the police.”

Ayodele’s mother, Adeola, a retired pharmacist with the Lagos State Government, said she was in Jerusalem for the Christian pilgrimage when the police murdered her son and heard the news when she returned to Nigeria.

“My son schooled in Benin Republic and France, where nobody killed him until he returned to Nigeria for the national service and the police had the effrontery to kill him,” she lamented.

She added that the police had been pressurising the family for an out-of-court settlement of the matter.

Ogheneovo’s widow, Chioma Ebobo, said she and her mother-in-law raced to the Adoff Police Station when they heard the news.

She said they met a policeman on the way, who asked them to go to the Badagry Police Station, where he claimed Ogheneovo was shot.

Chioma stated, “We asked him what happened to Ogheneovo, but he asked us to go to the Badagry Police Station, that my husband was dead. The next thing he said was that my husband and some people were smoking and ran away when they saw policemen, who shot at them.

“The next day, different stories started emerging that they went for a robbery operation and all that. He and I sold female clothes. He was innocent of the offence he was linked to.”

The counsel for both families, Adesina Ogunlana, said his clients would sue the police for N2bn for the murder of the innocent victims and the defamation of their characters, and subjecting their families to pain, public odium and ridicule.

The state Police Public Relations Officer, Bala Elkana, said the command had done the best it could by subjecting the errant cops to an orderly room trial, dismissed them from service and arraigned them in a conventional court, where they were being tried for murder.
Top Stories