Governor of Rivers state, Nyesom Wike has been attacked by senator Ibrahim Shekarau over demolition of a mosque. 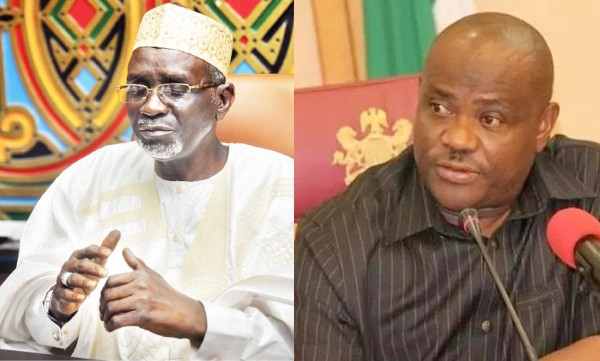 Shekarau and Wike
Teh Governor of Rivers State, Nyesom Wike has been slammed by Senator Ibrahim Shekarau over the demolition of a mosque in Port Harcourt and declaring Rivers State which he governs a Christian state.
Though the Rivers state government denied carrying out the demolition, the former Kano State Governor and Senator Representing Kano Central Senatorial District called on all right-thinking Nigerians to condemn the act which he described as "reckless".
He said “All rationale and conscious citizens of this great country, Nigeria should join in condemning the Rivers State Governor, Nyesom Wike for recklessly demolishing the Rainbow Town Central Mosque located at the Trans-Amadi Area of Port Harcourt and for irresponsibly declaring Rivers State a “Christian State,” and claiming to owe no apology to anyone.
“Muslims and other right-thinking and peace-loving citizens of this country should come together to condemn, in strongest terms, this irresponsible, reckless, rabble-rousing Governor whose apparent aim is to ignite a religious conflagration, the kind of which has never been seen in recent times.
“If a Muslim Governor were to come out openly and declare his state a “Muslim State” and proceed to demolish a church for any reason, all hell would have since broken loose in Nigeria, and sections of the Christian community would have since rushed to the “international community” and even the United Nations seeking protection against Muslims.
“The action of Governor Wike is a pointer to his being induced by other than rationale brain waves, as no leader in his right senses would contemplate stoking these embers of discord in a country so religiously, ethnically and regionally charged as Nigeria.
“We must repeat that were a Muslim Governor to be reckless to utter even half of what Governor Wike uttered, the fragile peace holding in this country would have since been jeopardized because of the intolerant nature of a section of the citizenry.
“Yet here we are, with the added tragedy of a cohort Christian clergy lining up to bless and endorse Governor Wike’s action."
Senator Shekarau added that Nigeria belongs to everyone and no state in Nigeria can claim to be mono-religious. He went on to name some Rivers State indigenes who are Muslims.
“Nigeria belongs to all, and no state in Nigeria could claim to be mono religious.
“It only takes a responsible leadership to carry everybody along. When I held sway as governor of Kano State between 2003 and 2011, we encouraged and guided the people to lead their lives according to the tenets of Islamic Law (Shari’ah).
”But we neither became power-drunk to demolish Churches nor disregarded the provisions of section 10 of the Constitution of the Federal Republic of Nigeria to declare Kano an Islamic State.
“Our fair dealings with every section of the community earned us commendation, even from Kano State Chapter and National Body of Christian Association of Nigeria (CAN) at different occasions. These Christian leaders are a still alive today to attest to my claim.
“It may interest Wike to learn that Mr. Tala Ilo from Bayelsa State and Mr. Chris Chibuzor Azuka from Anambra State, (both, born-again Christians) were special advisers in my administration.
“Wike’s claim that Rivers is a Christian State is pathological lies. It suggests that not only are the people of Rivers State 100% Christians but Muslims and adherents of other religions from other parts of Nigeria cannot make Rivers State their home.
” It also insinuates that Rivers State operates a government, a constitution of its own, different from the Nigerian Nation.
“It means Rivers State does not recognize or protect the interests of people like Alabo Mujahid Dokubo Asari, Alhaji Isa Boaima, Alhaji Sani Okiri, Alhaji Ahmed Sani Pe, Alhaji Abdul’aziz Pepple, Alhaji Sulaiman Akani, Alhaji Ibrahim Orlu, Alhaji Musa Brown, Chief Hassan Douglas and Alhaji Mustapha Wakama who are all Muslims and productive citizens of Rivers State" he wrote.
Top Stories