The Story Of Ayotunde, A Notorious Lagos Car Snatcher Who Wanted To Become A Pastor (Photo)


The story has been told of Ayotunde, a notorious car snatcher in Lagos who wanted to become a pastor. 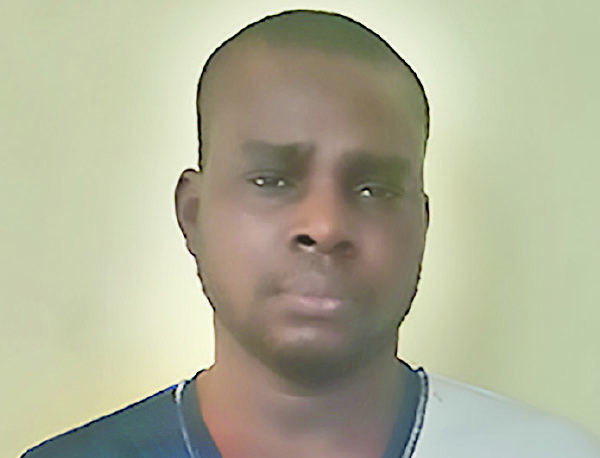 Ayotunde Babatunde
Meet Ayotunde Babatunde, a notorious car snatcher who is popularly known as ‘AY the guy with an English pistol.’ His life ambition is to be a pastor but he ended up a robbery kingpin who stole over 20 cars between Lagos and Ogun in just two months this year.
“I have lost count of the number of cars that I snatched in Lagos and Ogun states but if you lost your car while driving around areas close to Sango Ota in March and April, then I could be the one who attacked you.  But be sure the person who attacked you had an English pistol,” he stated when answering questions from Saturday Sun Correspondent.

Faced with the reality that his game is up, Babatunde, aged 30, confessed to have successfully snatched not less than 20 cars between March and April this year before he was finally arrested by operatives of Inspector General of Police, Intelligence Response Team (IRT) in Lagos.  Also nabbed were two other members of his gang, identified as Tunde Shabi and Adeolu Femi.

According to the suspect, their mode of operation is to ambush and overpower their target before detaining them for at least 24 hours so that they will have enough time to withdraw money from their bank account.

On his arrest, police sources explained that the gang was declared wanted when one of their victims simply identified as Eric reported that his Lexus Jeep was snatched at gunpoint close to his estate. He said that the armed robbers also detained him for hours and forced him to transfer all the money in his account before they dropped him off along the expressway that leads to Abeokuta.
Police detectives attached to IRT  in Lagos State, however, tracked and arrested them from their various locations around Lagos.

Further investigation revealed that the gang normally sells the stolen cars to a notorious car dealer in Cotonou. The suspects led the police to Cotonou where some of the cars which were sold at giveaway prices were recovered. One of his gang members, Ola was said to have died during a shootout with police during one of his operations conducted with another gang.

Babatunde told Saturday Sun that he decided to form his own gang immediately he was released from prison. “I am a native of Ayetoro in Ekiti State and a father of three.  I lost my dad when I was in secondary school and had no choice but to drop out of school. I became a street boy, joined Aiye cult group and gradually I started stealing cars to make ends meet. We normally steal cars parked on the street and sell them to any mechanic for as cheap as N150, 000. I cannot remember how many we have stolen but they are more than 10.

“Sometime in September last year, there was a cult clash and I was arrested and sent to Kirikiri prison. While in prison, I made friends with a lot of bad boys and we planned how to do better jobs whenever we are released on bail. I did not spend much time in prison because I was arrested over a fight on our street at Alagbado. I was a big boy in prison that was why it was easy to get some of these boys who later became my gang members. I became close pals to Ola and Tunde that was why we formed a gang as soon as we regained our freedom in February. I realized that I have gathered enough experience to control few boys.”

Just like he planned, Babatunde formed a four-man gang and within two months, he successfully snatched not less than 20 cars within Lagos and Ogun states. “The first thing I did was to travel to Cotonou in Benin Republic to see one Azeez who was introduced to me while in prison. He is from that country and a car dealer. He was the one who assisted me in buying three pistols that we used for our operations. He also gave us a link at the border in case we meet security men on the way.

“I was able to form a four-man gang and sometime in March, we went for the first operation. Two of them are bus drivers, so they are good at breaking into cars effortlessly. It was at Alagbado area of Lagos at about 11pm, we were moving around the area on foot when we spotted a Toyota Highlander parked in front of a gate and the occupants were waiting for the gate to be opened.

“We overpowered them and forced the others out except the driver who was a woman. We drove out with her and collected all the valuables in her bag. We forced her to give us her debit card password before we dropped her off at Idiroko in Ogun State. She did not have much in her account and the password she gave us for the second ATM which belongs to her husband was wrong. We took the car to Azeez in Cotonou and he paid N600, 000 for it.

“Other cars that were stolen in March that I can remember include Toyota Camry stolen at Alagbado, Toyota Fortuner Jeep, and a Mercedes-Benz GLE 400 4Matic. None of these cars was sold for more than N700, 000 and they were snatched in Lagos and Ogun. Because of our past experience with the woman, we started detaining our victims until we clear their accounts or withdraw enough money.

“In April, we snatched and sold Mitsubishi Pajero, Toyota Camry 2005 popularly known as big daddy, Lexus 350 2010 model, Lexus 350, 2005 model and Toyota Corolla 2005 model. All these were snatched in Sango Ota area and sold in Cotonou. These are the ones that I can remember, I have really lost count. The only thing I can remember is that we picked at least four cars on a weekly basis since I formed the gang.”

On the incident that led to his arrest, Babatunde said that they were on patrol looking out for who to rob when they noticed a Lexus Jeep. “Ilupeju Estate close to the toll gate is not well guarded, that’s why people can move in and out unnoticed. Sometime in April, we were moving around the estate at about 10 pm in search of a target when we noticed a Lexus jeep slowly driving into the estate. We divided ourselves because we don’t know which part he was heading to. When we finally got him, he was given the usual scare and he promised to co-operate.

“I took his phone and discovered that he has good money in one of the accounts. We forced him to transfer money to the account number of our godfather, Segun who is in Abeokuta prison. He is the one who connected us to Afeez and Gani who are all in Cotonou.

“First, he transferred N1million and we detained him till it was 12 am the next day and he transferred another N1million. We made sure that we released him before the family will think that he was kidnapped. We took him to a point in Ogun State and gave him N10, 000 before we drove off with his car. Because he co-operated, I also gave him his phones and laptop. I discovered he is a business man and it will be bad if he should lose all his contacts.”

Babatunde  however claimed that his wife is not aware that he is an armed robber. “Everyone in the area where I live assume that I am an estate agent because I have an office in Alagbado. Any time that I am going for an operation, I will tell my wife that I am travelling to Cotonou to buy rice for my customers. To further confuse her, I will come home the next day with a bag of rice and keg of oil. I am really sorry, although I cannot bring back all the things that I’ve stolen  but I am ready to change for good. If you were attacked by four boys with a pistol between March and April, we were the ones. I am sorry. I always wanted to be a pastor.”

Mistaken for a saint

The second suspect, Shabi claims that he decided to work with Babatunde because he was the one who kept him alive while in prison. “I am a bus conductor and we normally ply Ikorodu and Ketu areas of Lagos. Sometime in November 2018, our bus got spoilt along the road at night. To watch over the bus, I decided to sleep inside the bus till the next day. Unfortunately at night, police raided the area and arrested me and 20 other persons. We were told that the new DPO who was posted to that area ordered them to clear the streets of bad boys. He even told them to send us to prison, so that he can have peace before we are released.

“While in  the prison, I had to attach myself to Babatunde because he had money to buy food stuff that we were cooking. I served him and he told me that as soon as he comes out, we will form our own gang. We have done so many jobs together before police arrested me through him. I am the one who normally keep the gun because I have a house and in my area in Ikorodu, people see me as a saint.”
***
Source: Sun News
Top Stories