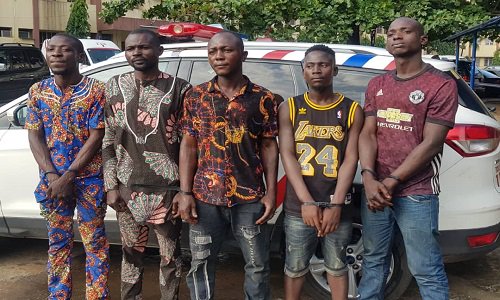 The suspects
Operatives of the Rapid Response Squad (RRS) have arrested five persons in connection with the alleged hijacking of a Taxify Toyota Corolla Sports in Lekki, Lagos State, according to a report by TheNation.
The suspects, Michael Sosa, 27, Nelson Benson, 24, Idowu Dauda, 30, Owolabi Shobayo aka Daju pa, 29 and Biliaminu Abu alias Gengen, 43, were nabbed in Ijoko and Ota in Ogun State last week for allegedly hijacking and selling a Taxify car in February.
The Nation gathered that they allegedly participated in the selling of the car to a dealer in Republic of Benin for N250,000.
It was learnt that Sosa, in company of Dosumu, now at large, sometime in February converged on Elegushi Beach, Lekki where they hatched the plan to hijack a Taxify car, move it to Ogun State and sell.
Sosa, a suspected ‘yahoo–boy’, after waiting till 10pm, ordered a Taxify ride from Agungi Estate to Lagos Island. In the car with him were Dosumu and Dauda.
The police quoted Sosa as saying: “On Abraham Adesanya Estate, Lekki, I told the driver I wanted to urinate. We alighted. While I pretended to be urinating, Dosumu poured dried pepper on the driver. He screamed and jumped out of the car. He started shouting for help. I got on his seat and drove the car away.
“I drove to the road leading to Alpha Beach where we stopped for some hours because we suspected we were being trailed. At about 4am, I proceeded to Agege, dropping Dosumu at Omole. I picked Benson at Agege Stadium. Nelson was to direct us through the routes that prevented us from encountering the police and to Ijoko.

“At Ijoko, I took the car to Alfa Mouka’s house. He was my spiritualist. I told him the car was stolen. It was at that point we began to source for buyers. We were introduced to Daju pa and Gengen. They are dreaded cultists and notorious criminals in the area. I told them I wanted to sell the car for N300,000. We later discovered that the car had no papers. This made it difficult to sell.
“We got a dealer who asked us to bring it to the Republic of Benin. Gengen and I took it there around 11pm after changing the number plate
“We sold the car for N250,000. We would have sold it at a higher price but for the papers that were not available. I took N190,000. I gave N60,000 to Gengen and N40,000 to Eniba (Dauda) to give Michael. Although, I got to know that it was N30,000 that got to him. Our link to Benin Republic got N13,000. That was how we shared the money.”
Police Commissioner Zubairu Muazu said any criminal who thinks he can escape with nefarious activities perpetrated in Lagos needs to think twice, as the command is at alert and will arrest any criminal in any part of the country.
The suspects have been transferred to the Special Anti-Robbery Squad (SARS) for further investigations.
Top Stories