Governor kayode Fayemi of Ekiti state, alongside his wife have taken to social media to gush about each other over the anniversary of their marriage. 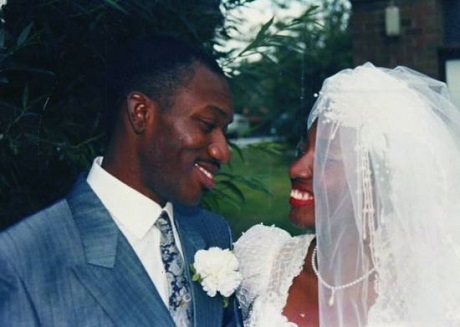 Kayode Fayemi and wife, Bisi, on their wedding day 30 years ago
Ekiti governor Kayode Fayemi paid homage to his wife, Bisi on Twitter today. The couple has been together for 30 years.

“‘Labisi, three decades and still counting… Thank you for being an amazing wife, a loving partner, a wonderful mother to Oluwafolajimi and my best friend at all times. Happy wedding anniversary. JK. ❤️🙏”

Bisi, born 11 June 1963 in Liverpool as Olabisi Adeleye, also paid her own homage to her husband, who has become two-term governor of the state and a federal minister.

“And now these three remain: faith, hope and love. But the greatest of these is love’ 1 Corinthians 13:13

#JKFandBAF #LoveStory”, she wrote, exhuming a photograph of the wedding and another that reflects the political life of her husband.

Kayode and Bisi attended different universities in Nigeria for their first degrees. While Kayode went to the University of Lagos, Bisi, attended Obafemi Awolowo University, Ile-Ife. Both met later in Ife, when Kayode came for a masters programme. Bisi also was back for a master’s programme. 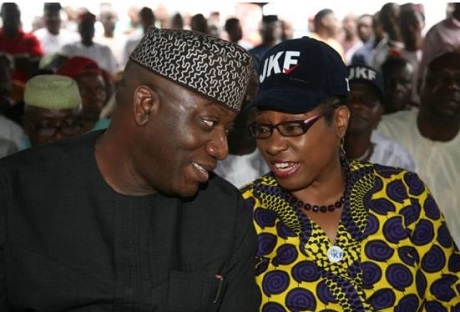 She once told the story about how the relationship started, after a chance meeting in the library of OAU:

“It started in Ife. He attended University of Lagos, UNILAG and came to Ife to do Master’s in International Relations. I did a Master’s in History but I did elective in the department of International Relations. I knew him in my class as someone very quiet and good looking. One day, I was in the library and I needed to borrow some books from the library and I was not with my library card and I looked around to see anyone who could help me take the books out. I saw Kayode sitting on the other side. I walked up to him and very politely asked if he had his library card on him and he said “Yes” and I told him that I needed to take some books out and asked: Do you mind borrowing the books for me? And he said, “Of course” and I gave him the list of the books and l told him I would come and pick the books from his room and that was it and the rest is history”.

In the UK, both Bisi and Kayode also went for further education. Kayode got a Doctorate in War Studies from King’s College, University of London, England, specializing in civil-military relations. Bisi received an MA in Gender and Society (1992) from Middlesex University.

While Kayode has plunged into politics, Bisi has faced areas that interests her most: feminist activism, writing and policy advocacy. She serves on the Executive Boards of the African Women’s Development Fund, and the Global Fund for Women. She is also chair of the Advisory Council of the Nigerian Women’s Trust Fund and also serves on the Governing Council of Elizade University in Nigeria.

She runs an online community called Abovewhispers.com, where she writes a column called “Loud Whispers”. She is a UN Women Nigeria Senior Advisor, and was recently appointed as a Visiting Senior Research Fellow at King’s College, University of London.

The marriage is blessed with a son, Folajimi.
Top Stories