Inside The 'Risky' Life Of Bobrisky


This is a look into the life of Bobrisky, one of the most controversial Nigerians on social media at the moment. 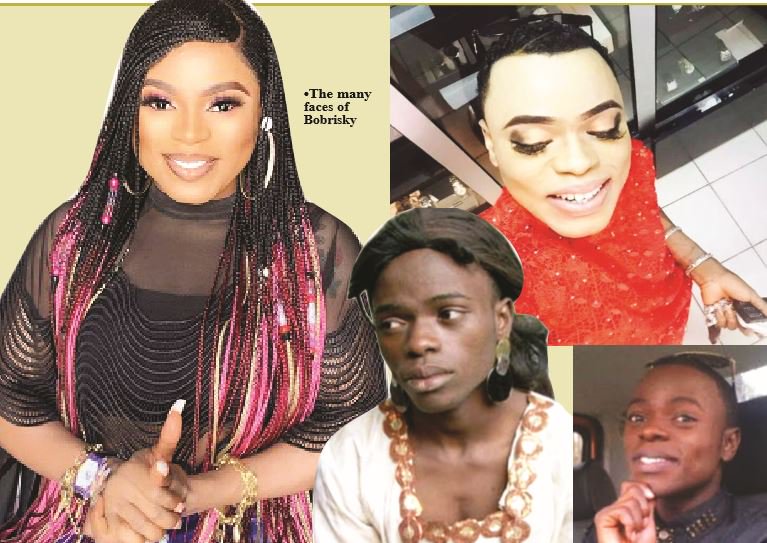 The many faces of Bobrisky
Bobrisky’s story is not easy to tell. The first problem is deciding what pronoun to use. By the circumstances of his birth, ‘he’ is the right pronoun, but by what Bobrisky has chosen, ‘she’ is  correct.
“Tani bro e? (Who is your bro?). I’m a fine babe,” Bobrisky once replied a commentator who referred to him as a man.

There is also no agreement on whether or not he is a transvestite or just a crossdresser.

A primary school mate said he had always behaved like a woman trapped in a  man’s body.

In a video, which was uploaded on YouTube on January 19, 2018, a dark man sporting a white bathrobe on a white t-shirt, is sitting on a brown sofa.

There is a gold chain around his neck and in his right hand is a wad of N1,000 notes and a glass of wine.

He pulls out note after note with his left hand and places it on the waist of a light-skinned dancer in a black tight-fitting trouser and crop top, shaking a slim bottom in his face.

The man kisses the tips of his left palm and touches the dancer’s waist excitedly before the video stops playing.

The video is titled ‘Bobrisky twerking for her sugar daddy’.

He attended secondary school at the prestigious King’s College, Lagos, before bagging a BSc from the University of Lagos (UNILAG).

He was a very good dancer, choreographer and make-up artist at the university. In May 2019, Bobrisky stated on his instagram profile that his pronouns are “she” and “her”.

It is not clear when Idris became the cross-dressing Bobrisky, but he went viral in October 2016, when President Muhammadu Buhari’s social media aide, Bashir Ahmad, pulled out of appearing with him on a social media panel in Abuja.

“The organisers invited me to speak on the fact that people are talking about Bobrisky,” the then 25-year-old told AFP.

He added: “Withdrawing wasn’t nice. In Nigeria, the majority of people here judge you so fast.”

According to AFP, he often recounted online how his lifestyle was funded by a rich, mystery man he referred to only as “bae.

A few years earlier, a video surfaced of Bobrisky being stripped by the police of the female clothing he was wearing. Two sachets of water – pseudo breasts – were pulled out of the low neck gown.

Bobrisky, who turned 28 on Saturday, fled his Lekki, Lagos neighbourhood to evade arrest following the deployment of policemen to scuttle his planned birthday celebrations.

He had planned a birthday bash at the Pearls Gardens in Lekki Phase 1 on Saturday and another at the Paradise Boat Club, Victoria Island on Sunday.

But Police Commissioner Zubairu Muazu ordered the deployment of water-tight security to ensure the party did not hold and also arrest Bobrisky and other crossdressers or homosexuals who planned to attend.

The Nation gathered that five suspected members of Bobrisky’s club were arrested for breach of the public peace and indecency.

According to the police, the government would not allow continuous breach of existing laws, noting that allowing the public display of actions that could corrupt young people was inimical to national consciousness.

Earlier in the week, the Director-General of the National Council for Arts and Culture, Otunba Olusegun Runsewe, threatened to go after Bobrisky and others like him, describing the cross-dresser as “a disgrace to the nation.” Bobrisky replied by saying Runsewe was a small fry.

The police had earlier in the year warned all homosexuals to flee the country or be dealt with in accordance with the Anti-Same Sex Marriage Law which prescribes a 14-year jail term for all persons involved in a homosexual relationship.

Former Public Relations Officer of the Zone 2 Police Command, Mrs Dolapo Badmos, had said: “If you are homosexually inclined, Nigeria is not a place for you. There is a law here that criminalises homosexual clubs, associations, and organisations with penalties of up to 14 years in jail.

“So, if you are a homosexual in nature, leave the country or face prosecution. But before you say, ‘does this matter?’ Kindly note that anything against the law of the land is criminal and all crimes will be punished accordingly no matter how small you think it is.”

What the law says

The law Badmos is referring to is the Same-Sex Marriage (Prohibition) Act of 2013. It says a person who registers, operates or participates in gay clubs, societies or organisations, directly or indirectly makes a public show of same-sex amorous relationship in Nigeria commits an offence and is liable on conviction to a term of 10 years. Anyone convicted of entering into a same-sex marriage contract or civil union faces up to 14 years imprisonment.

Following the police’s raid, Nigerians on social media were divided over the use of the pronoun he to refer to Bobrisky.

Bisi Alimi, a gay man and advocate for the lesbian, gay, bisexual and transgender (LGBT) rights cautioned that the right pronoun for Bobrisky is ‘she’ and ‘her’.

“Dear #Nigeria allies, the correct pronoun for #Bobrisky is “She/Her”. Using this will help reduce stigma and show that you really care. You can’t use a wrong pronoun and say you are an ally,” he tweeted.

“Just In: Bobrisky on the run as Police Storms. Shutdown venue if his 27th birthday celebration in Lekki, chase away everyone,” Iselaiye tweeted to which Ogunmuyiwa replied, “HER!!! Her pronouns are she/her!!! And this us transmisogynistic violence.”

What does the future hold for the like of Bobrisky?

A 2017 survey by NOI Polls compared attitudes towards LGBT people in Nigeria against a 2015 poll.

It found a seven per cent increase in acceptance of LGBT people, and a nine per cent rise to 39 per cent of those surveyed who think that LGBT people should be allowed equal access to public services, such as healthcare, education and housing.

Will Nigerian society ever accept cross-dressing and other LGBT lifestyles, such as Bobrisky’s? Only time will tell.
***
Source: The Nation
Top Stories

Are You Trying To Woo A Lady? Check Out Six Tips On How To Do It Properly
Recent Stories