A father and son going for Obafemi Awolowo University post-UTME test have been killed by a bus. 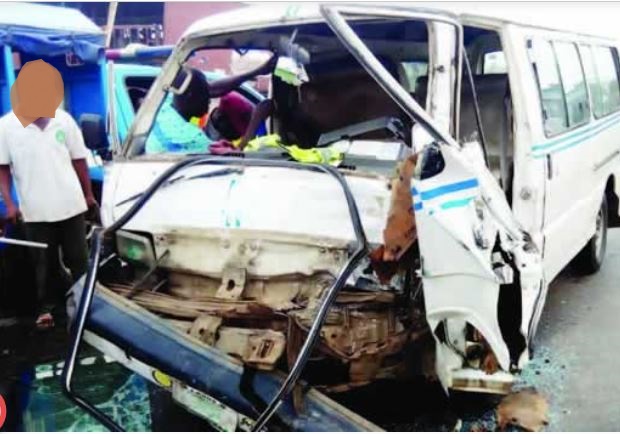 File photo
A luxury bus heading to Abuja from Akure yesterday crushed a father, his son and a commercial motorcyclist to death on the Ife-Ibadan Expressway, NAN reports.

The accident occurred at the RCC junction on the busy road.

This was as six people also lost their lives yesterday in an accident involving a truck and three other vehicles at Agulu community on the Amawbia-Agulu Expressway in Anaocha Local Government Area of Anambra State.

The father had accompanied his son to sit for the post-Unified Tertiary Matriculation Examination (post-UTME) test of the Obafemi Awolowo University (OAU), Ile-Ife, at a Distance Learning Centre at Moro in Ile-Ife, Osun State.

The father and son’s identities were, however, withheld in deference to the family while the commercial motorcyclist was identified simply as Mr. Sunday.

A witness said the bus, with registration number AAA 45 XW and belonging to Ekeson Transport Company, was heading against traffic when it ran into the motorcycle marked TTD 242 QJ, killing all the three.

The remains of the victims had since been deposited at the Obafemi Awolowo University Teaching Hospital Complex (OAUTHC) mortuary in Ile-Ife.

The Head of Operation of the Federal Road Safety Commission (FRSC), Aderibigbe Odogiyan, confirmed the incident to the News Agency of Nigeria (NAN).

He said: “Immediately we heard about the incident, we quickly went there, but the victims had been taken to the mortuary.”

He urged them to exercise patience while driving to minimise road crashes.

Meanwhile, the Anambra State Sector Commander of the Federal Road Safety Commission (FRSC), Mr. Andrew Kumapayi, who confirmed this, told the News Agency of Nigeria (NAN) that 17 other people sustained injuries in the accident, which occurred about 8a.m.

Kumapayi explained that the driver of the truck with registration number XB283MBA, lost control and rammed into three other vehicles.

The sector commander said that 23 people were involved in the accident.

He said: “Our rescue team arrived at the scene about 10.45a.m. after we were contacted.

“A total of 23 persons were involved in the crash. Six died – five males and a female – while 17 others sustained various degrees of injury.

“The corpses have been deposited at the mortuary in a general hospital in the area, while other injured persons are receiving treatment at St. Joseph Catholic Hospital at Agulu.’’

Meanwhile, Governor Willie Obiano has visited the scene of the accident and the injured people in hospital.

He said: “It’s so unfortunate that many people lost their lives in this accident but we will ensure that the injured persons get adequate treatment.

“The commissioner for health, who is a medical doctor, is also here to ensure that.

“It’s a very good road with no potholes but apparently, the truck, laden with steel and metal objects, lost control and hit other vehicles.

“I sympathise with the families of the dead. We will take good care of the injured.”
Top Stories