Kaduna State Governor, Nasir El-Rufai had recently said the party should abandon zoning for competence in 2023. 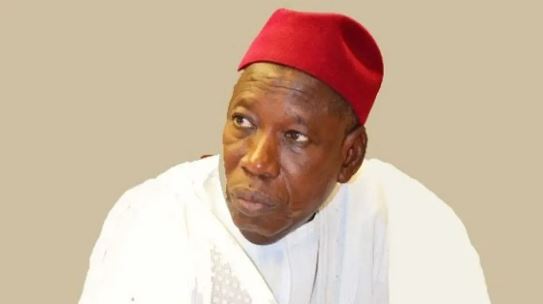 Governor Abdullahi Ganduje
The Kano State Governor, Abdullahi Ganduje, has revealed who will determine President Muhammadu Buhari’s successor on the All Progressives Congress, APC platform come 2023.
According to him, the ruling party will determine which zone will produce the next Nigerian leader at the expiration of Buhari’s tenure.
Kaduna State Governor, Nasir El-Rufai had recently said the party should abandon zoning for competence in 2023.
Reacting to this, Ganduje said, “The way I look at it is that, it is an issue between idealism and realism. Idealism is a situation whereby things should be done in accordance with ideas.
“If things are done like that, then everybody should have equal treatment and everybody has an equal chance to contest and then, what the people decide should be done.
“Now, the issue of realism. Nigeria is a multi-ethnic, multi-religious country with several geopolitical zones. In reality, people are yearning for the participation of different political zones and not the politics of North and South.
“So, the reality of the situation is that people are crying of marginalization in the leadership of the country. But, the idealism is that people should participate and be selected based on their capacity.
“So, it is not the governor of Kano state that should decide whether it is idealism or realism.
“It is the party that will determine which should be applied in Nigeria and you know that it is a political strategy. So, the political party should decide which option to follow. “
Top Stories