Horror As Woman Burns Man To Death Over N200 In Edo


A man has paid with his life after he was set ablaze by a woman over refusal to pay his debt. 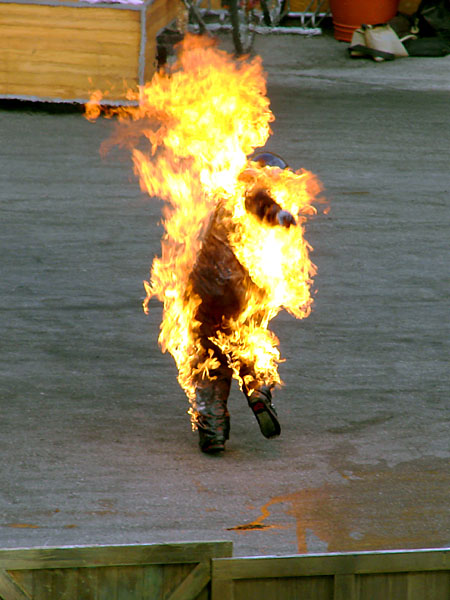 File photo
A man, Sunday Arigbe, has been set ablaze by a woman over his inability to pay the debt he owed her, according to PM Express.
It was gathered that the incident took place at about 2am on August 26, 2019, around Jakpa Junction area of the city in Effurun, Uvwie Local Government Area in Delta State.
The Police have arrested the 42-year-old woman, simply identified as Faith, who allegedly poured fuel on Sunday Arigbe and set him ablaze over N200 debt. She was said to have carried out the gruesome act alongside a female accomplice, a black market petrol operator now at large.
The victim was said to have died as a result of severe burns he sustained after the woman reportedly poured fuel on him while the second lady put the fire.
Trouble was said to have ensued between the duo when the woman demanded for her money, which resulted in her pouring fuel on him over the debt. It was gathered that after she had poured fuel on Arigbe, the second woman, Faith, threw a match stick at the deceased’s direction and he was immediately gutted by fire.
He was said to have died before they could rush him to the hospital for treatment and his corpse was deposited at the mortuary for autopsy.
An eye witness said, “Mr. Sunday Arigbe was owing the woman, popularly called Mama, N200 balance for the fuel he had bought from her some time ago. When she asked for the money, they started exchanging words and the woman poured petrol on him. Another petty trader, close to the woman, threw a match stick on Sunday’s body which resulted in him getting burnt. All his body got burnt and he died before they rushed him to the hospital after sympathizers were able to put off the fire” one of the witnesses recounted.
Following the incident, Police operatives from Ekpan Police Division have arrested Faith while Mama absconded. It was gathered the Police have repeatedly raided Jakpa Junction in search of the fleeing woman. A relative of the deceased, who drew the attention of this reporter to the incident, accused the Police of attempt to sweep the matter under the carpet.
The deceased’s relation, who spoke under the condition of anonymity, while demanding justice for his slain brother, said the Police were not doing enough to apprehend the second culprit.
When contacted, the State Commissioner of Police, Mr. Adeyinka Adeleke, confirmed the incident. Adeleke, who said one of the suspects has been an arrest, added that she would be charged to Court.
Also confirming the incident, the State Police Public Relations Officer, Onome Onowakpoyeya, said one of the suspects, Faith, was already in Police custody.
Top Stories