Xenophobia: Actress, Iya Rainbow Kneels Down At The Beach To Pray For Nigeria (Video)


Nigerian actress, Iya Rainbow has been spotted at the beach kneeling and praying for Nigeria over the xenophobic attacks. 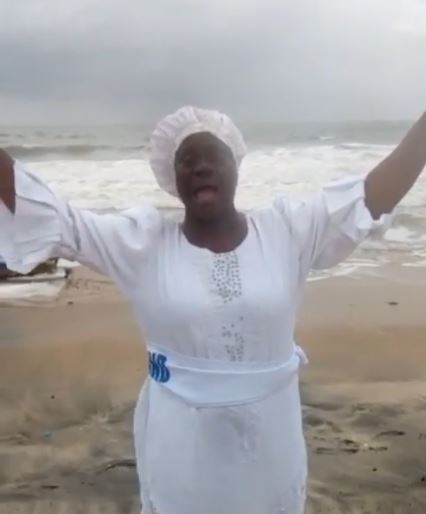 Unlike others, who vented their chagrin on social media platforms, the 76-year-old movie star took the current affairs of the country to God in prayers.

In a video shared on her Instagram page on Tuesday, she is seen at an unknown beach intervening for the country through prayers.

Clad in a white garment and a cap to match, Iya Rainbow can be heard speaking in Yoruba language while calling for help from God.

“God, my country Nigeria is dying. Nigeria is a great country with rich natural resources. It is widely called the giant of Africa. No doubt, it is a country in the eyes of foreigners who wish to invest their resources into the country,” she captioned the video.

“Nigeria has continued to play a leading role in some sectors in Africa. And it has the potential to be a wider global player in the coming decades through the prayers of intercessory. The Bible says, Psalm 122:6, Pray for the peace of Jerusalem: they shall prosper that love thee.”

A post shared by MAMARAINBOWOFFICIAL (@mamarainbowofficial) on Sep 3, 2019 at 2:09pm PDT