Woman Strangles Husband, Beheads Him Before Feeding His Manhood To A Dog (Photo)


A woman has left people in serious shock after beheading her husband before feeding his manhood to a dog. 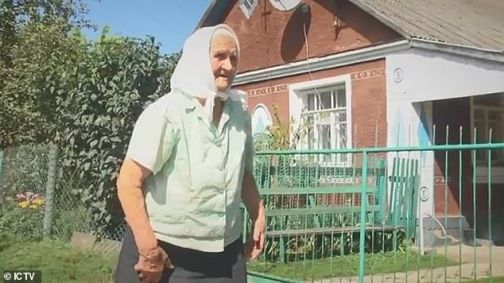 Nadezhda
After suffering years of domestic abuse, a 48 year-old Ukrainian woman has strangled her husband, beheaded him and hacked off his p*nis, throwing it to her dog to eat for dinner.
The woman, identified only by the name Maria, lives in  the village of Obariv in the north of the country.
According to Dailymail, the woman told police ‘she was suffering domestic violence for ages and murdered her husband to put an end to it’ and that ‘it was the only way out’.
According to a report by Mail Online, the woman  attacked her spouse Oleksandr, 49, in their bedroom after he came home from night shift work and fell asleep.
She strangled him to death with her bare hands before grabbing an axe and hacking the man’s head off, police said.
After that Maria used a kitchen knife to chop off the victims genitals and fed the organ to her dogs, local media report.
She then tried to cut the body into pieces but failed, investigators said.
Covered with her husband’s blood, Maria rushed out of her family’s house to the street where she was spotted by Nadezhda Opanasiuk, a woman living next door.
Mrs Opanasiuk said to local media: ‘Her hands, feet and clothes were in blood.
‘She said, ”I am in trouble. I’ve killed my husband.”
‘I did not believe her. I thought they had a quarrel and she might have hit him. I went to see if he needed medical help.
‘When I walked into the room, I saw his mutilated body. The bedsheets were soaked with blood.”
'I asked her, ''Where's his head?', and she replied, ''there, in the sack''.'
According to Mrs Opanasiuk, she felt quite sick but managed to reach and alarm other neighbours who called the police.
Maria confessed to murdering her husband at the scene and told cops all the details before being arrested.
Police spokesman Vadim Artiukhovich said: 'The suspect confessed in full at the scene. She was charged with murder and taken into custody.
'The woman said that she was constantly suffering physical and emotional abuse and did not see any other option to end her misery.
'Neighbours say they, in fact, saw the husband beating her up and chasing her with an axe a lot of times.
'However, the woman has never reported the incidents.'
Maria's son Viktor Fesianov cannot forgive her for what she did.
'I know she is my mother. But I do not want to see her any more,' he told local media.
Maria faces up to 15 years in prison if found guilty. The investigation continues.
Top Stories