Xenophobia: Governor Fayemi Opens Up On Why He Ignored Boycott And Traveled To South Africa


Following reports that Governor Fayemi was in South Africa while other Nigerians boycotted a visit to the country, he has reacted. 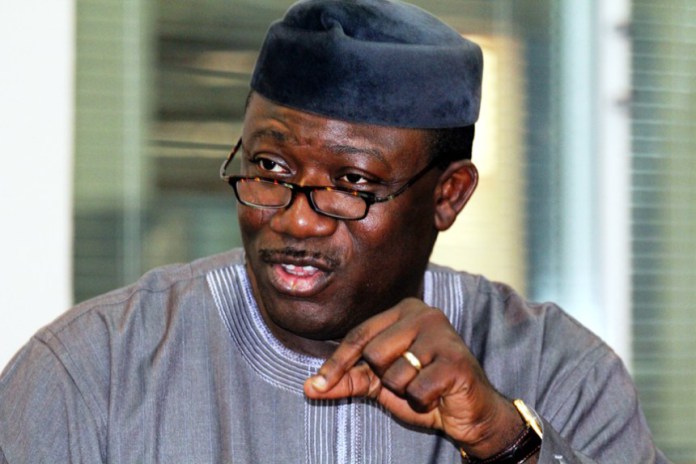 Ekiti Governor, Kayode Fayemi
Governor of Ekiti State, Kayode Fayemi, has revealed the reason why he travelled to South Africa, despite the protests that had greeted the xenophobic attacks on Nigerians resident there.
The Kano Emirate Council had shared the photographs of Fayemi, alongside the Kaduna State Governor Nasir El-Rufai; and the Emir of Kano, Muhammad Sanusi, at the Africa in the World conference holding in Stellenbosch, South Africa.
Another global event, the World Economic Forum on Africa, is also holding in Cape Town between September 4th and 6th.
The WEF was boycotted by the Federal Government in protest against the xenophobic attacks visited on Nigerians resident in South Africa.
Nigerians had expressed concerns about the presence of some public figures in South Africa at a time citizens were protesting across the country against the xenophobic attacks.
Since the Federal Government had withdrawn its participation at the WEF, many Nigerians who saw the photographs of the three public figures on Twitter had expressed outrage, thinking the emir and the governors were at the Cape Town forum.
Fayemi has since denied attending the World Economic Forum.
A statement by his Senior Special Assistant (Electronic Media), Kanmi Olatoye, declared, “Contrary to some misleading online reports, Ekiti State Governor, Dr. Kayode Fayemi, was not at the World Economic Forum in South Africa.
“Rather, the governor is in South Africa to honour an invitation by a long-time friend and one of Nigeria’s most celebrated journalists, Mr. Dele Olojode, at the Africa in the World Festival of Ideas, which held in Stellenbosch, a university town in South Africa’s Western Cape province.”
Continuing, the statement asserted that, “More importantly, the event already held before the decision of the Federal Government to boycott the WEF programme.”
Top Stories