Xenophobia: Why I'm In South Africa Despite Boycotts - Ezekwesili


Oby Ezekwesili has responded to criticisms from Nigerians on why she attended the World Economic Forum at the time the country has boycotted activities in South Africa. 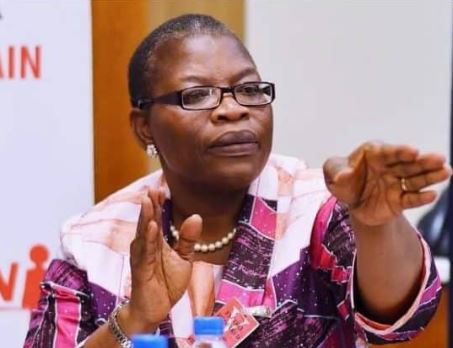 Mrs. Oby Ezekwesili
A former Minister of Education and presidential candidate of the Allied Congress Party of Nigeria in the February 2019 General Election, Mrs. Oby Ezekwesili, has responded to criticisms trailing her participation at the ongoing World Economic Forum for Africa.

She said that she was at the South Africa event to ensure that authorities of the southern African country never again looks away while Nigerians are attacked, maimed and killed.

In the wake of public anger and subsequent protests that greeted the xenophobic attacks on Nigerians resident in South Africa, the Federal Government had cancelled its participation at the continental event, and had also threatened to recall the nation’s High Commissioner to South Africa.

Mrs. Ezekwesili is currently participating at the three-day event, which commenced on September 4th and will end on the 6th.

Many of her social media followers and other Nigerians had condemned her participation, while others felt it was in order.

In response to her critics via her verified Twitter handle @obyezeks, the ‘Bring back Our Girls’ advocate, stated, “My life vision is to always stand for the weaker. This is a role I play within and without Nigeria.

“For me, the next three days in South Africa are programmed to achieve a set of specific action by the South African Government.

“Our citizens’ preservation is what matters to me, not the noise.”

She added that those who had genuine concerns about her participation at the WEF should realise that her decision to be at the event was thoroughly considered.

“I am in South Africa leveraging my ensure (sic) that South African Government never again looks away while our citizens are attacked, maimed and killed.

“Those of you who take delight in making ‘politics’ of our citizens’ lives can carry on with your usual trade.

“I stand strong on doing the things one can do to safeguard lives.

“Citizens’ lives are too sacred and important for me to be drawn into your latest ‘playground.’ Never.”

During a panel discussion at the event, she was asked about her opinion on the issue of attack on foreigners in South Africa, and Ezekwesili responded, “The reality of what we saw in South Africa is too sordid to be a conversation-by-the-way.

“We cannot have African Continental Free Trade Agreement and yet we have a situation of black-on-black violence in this country (South Africa).

“So, we need to have a conversation on what kind of integrated Africa we want to drive forward.”
Top Stories