A woman operating a ponzi scheme business has found herself in serious trouble after being arrested by the police. 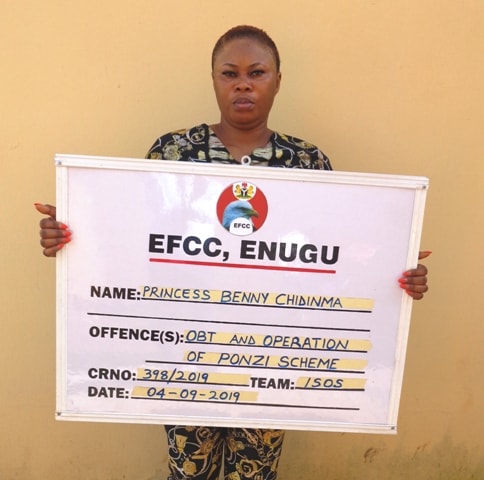 Princess Benny Chidinma
The Economic and Financial Crimes Commission, EFCC, Enugu zonal office is currently interrogating Princess Benny Chidinma, Managing Director of a suspected Ponzi Scheme, “Millionaire African Leaders Club, on allegations of providing financial services without statutory license.
Chidinma’s arrest comes two days after her Enugu branch Coordinator, Nwonu Priscilla Chika was apprehended by operatives of the Commission following a raid on the premises of the club at No 79 Nike Road, Abakpa Nike, Enugu, Enugu State. Three promoters and newly recruited staff of the organisation were arrested in the operation.
Under interrogation, Chidinma admitted, that the Ponzi scheme was initially registered as a Non-Governmental Organization(NGO) and that she was running it in connivance with her accomplice, one Ken Onyekwere Okwuikpo who resides in PortHarcourt, Rivers State.
She further revealed that the scheme pays 70% (seventy percent) interest and not 50% as earlier stated by the Coordinator as annual return on investment, to contributors.
She also disclosed that their offices are spread across Nsukka, PortHarcourt, Aba, Abakaliki and Enugu.
Investigation is still ongoing, while efforts are being made to arrest other accomplices.
Top Stories