A woman's decomposing dead body has been found inside her apartment in a community in Lagos state. 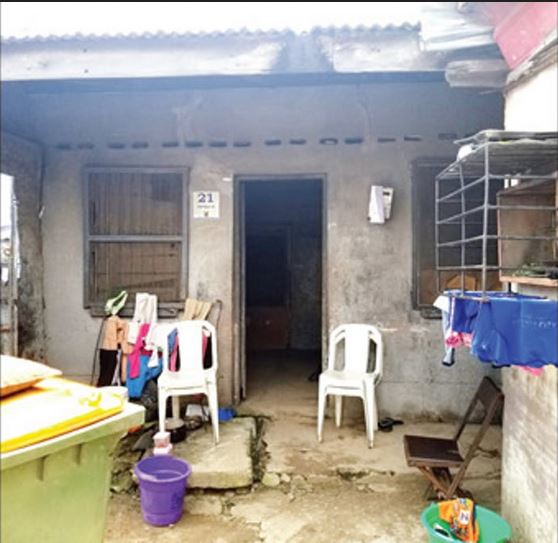 The apartment
According to a report by Punch Metro, the recent discovery of the decomposing body of a tenant, Ijeoma Eminista, in her one-room apartment at No. 21 Onitolo Street, Surulere, Lagos State, threw other residents of the house into confusion.

It was learnt that the deceased’s corpse was discovered when other tenants became worried as to her whereabouts having not seen her for two days.

The neighbours said Eminista usually went out early in the morning and returned late at night, so it was not unusual that she was not seen initially.

Punch Metro reports that the deceased’s window was left open all the while, which made neighbours to assume that she was around and out of curiosity, they peeped through the window and saw her lying on her bed.

She was said to be unresponsive to several calls and this prompted her fellow tenants to inform the landlord, who after confirming the discovery, reported to the police.

During a visit to the house by PUNCH Metro, a resident, who simply identified herself as Kafayat, said neighbours sensed that something strange had happened when no one could confirm seeing Eminista leaving the house.

Kafayat stated, “I saw her on the Tuesday before her disappearance when she came out to fetch water, and when she was done, she swept her room and washed the toilet. So, when other neighbours asked after her, I said she was in her room.

“I even slept in front of her room, but I became uncomfortable when I started feeling weak; my relative, who also slept beside me, started shivering and vomiting, so we sensed that something strange had happened.

“We started asking if anyone saw her stepped out of her room for two days, but no one saw her. Even the neighbour, who usually goes to the mosque to pray early in the morning, said he did not see her.

“Her window was left opened, which made us to conclude that she did not travel, and when we peeped through her window, we saw her lying on the bed. When we called her, she didn’t respond, so we immediately informed our landlord.”

Another resident, who spoke on condition of anonymity, said the landlord, who visited the house to confirm the incident, informed the police, who mobilised personnel to evacuate the corpse.

He said, “The landlord came on the third day and when he could not enter the room, he also peeped through her window and saw her lying on the bed. The landlord went to report the incident at the police station. So, the operatives came, forced open the door and took the corpse away; afterwards, her room was sealed off.

“Eminista stayed alone and hardly associated with anyone. She used to leave the house early and come back late. She was always going to church; at a point, she didn’t come home for a long period and when she returned, she was very lean. But because she hardly related with other tenants, no one could ask her what happened.”

The state Police Public Relations Officer, Bala Elkana, said police personnel forced the door open to evacuate the decomposing corpse, which was deposited in the Mainland Hospital, Yaba, adding that efforts were ongoing to locate the deceased’s family.
Elkana stated, “On Friday, August 16, 2019, around 2.18pm, one Gbolahan Adesanya, the landlord of No. 21 Onitolo Road, Surulere, reported that received got a phone call around 11am that his tenant, Ijeoma Eminista, had locked herself inside her room for two days.

“Detectives, who were mobilised to the scene of the incident, peeped through the window and found her lifeless body on the bed. The door was forced open and the corpse, which had started decomposing, was evacuated and deposited in the mortuary of the Mainland Hospital, Yaba. Efforts are on to locate her family.”
Top Stories