There was pandemonium at a village in Akwa Ibom after an angry son burnt down his father's house over a disagreement. 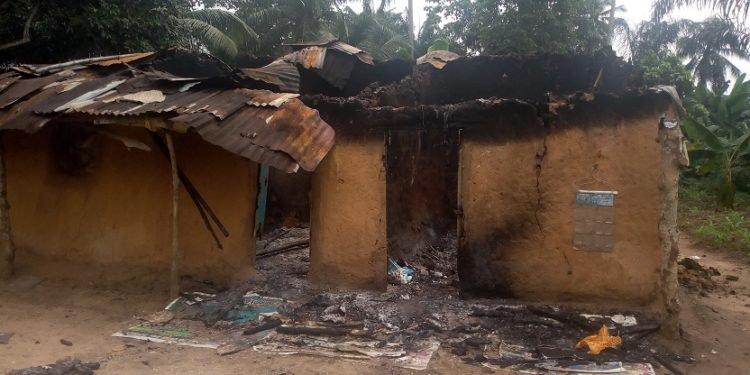 The house burnt down by the man's son
A middle-aged man, Okon Samson Udofia, has appealed to the Akwa Ibom state government and concerned individuals to come to his help after his son burnt down his thatched house.
According to TheNation, Udofia, an oil palm tree tapper and native of Ikot Nya village in Nsit Ibom local government area of the state, lamented that he is homeless and in dire need of a roof over his head.
Narrating his ordeal to our correspondent, Udofia said his 20-year old son, who is apparently mentally deranged, set fire to his thatched house at about 9 pm while he was asleep.
He said his sick son was a serious threat to his life and the entire community, adding that he had made several entreaties to the police to save the situation but to no avail.
”My son, Iniobong is mentally unwell and I have been crying and asking the police to arrest him and take him to a psychiatric hospital but they they(the police) keep telling me it is not their responsibility to arrest mad people.
”My son has been very violent to the extent of threatening to kill me and other villagers. Last night he set fire to my house while I was sleeping at about 9 pm.
”The fire burnt the house and my properties worth over N500,000. It is by the grace of God that I managed to wake up and escape. This is not the first time he has commuted this kind of atrocity”, he said.
Udofia said his predicament was a warning sign to all villagers at Ikot Nya as his rampaging son, if not arrested and taken to a psychiatric hospital, may kill somebody very soon.

The man whose house was burnt down
”I am using this opportunity to call on the police and the state government to urgently arrest Iniobong and take him to the psychiatric hospital otherwise he will cause more destruction of properties and even life than what he has done to me”, he cried.
Mr Udofia whose house was burnt down by his mad son
One of the villagers, Udeme Uyoatta, who spoke to our correspondent said the community is no longer safe as Iniobong was on the prowl.
Uyoatta said the community had made several appeals to the Divisional Police Officsr (DPO) to arrest Iniobong but that he kept saying it was not the responsibility of the police to arrest mad people.
All attempts through phone calls and text messages to reach out to the DPO at Ikot Nya proved abortive as at the time to filing this report.
Top Stories