One of the victims abducted alongside Siasia's mother, Beauty Ogere has been released by their abductors. 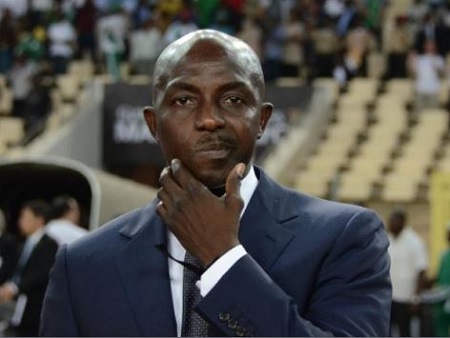 Samson Siasia
Abductors of Beauty Ogere, the mother of a former skipper and Coach of the Super Eagles, Samson Siasia, have released one of their victims, Florence Donana.

Donana was abducted alongside her 17-year-old granddaughter by the hoodlums, who first broke into the family house of Siaisia to seize Ogere at 2am.

But it was gathered that about 50 days after the incident and following prolonged negotiations between the families of the victims and the hoodlums, the kidnappers only released Donana, whose family paid some ransom.

A source from the community, who spoke in confidence, said the Donana family negotiated undisclosed amount of ransom with the kidnappers and sent someone to deliver the money to them.

He said the kidnappers collected the money, held the ransom payer captive and released only the aged Mrs. Donana.

“The 17-year-old granddaughter was not released. The mother of Siasia was also not released because the family had yet to agree on ransom. They are still holding three persons captive”.

The source, however, lampooned the police leadership headed by the Commissioner of Police, Uche Anozia, for not living up to its duty on the matter.

He said the kidnap case had exposed the current state police leadership as clueless and wondered why the octogenarian mother of Siasia could spend 50 days in kidnappers’ then without the police bursting the crime.

“It seems the commissioner of police has forgotten this case. The kidnappers are having fun, tormenting the families of their victims and acting with ease and impunity yet the police have said nothing on this case.

“They have no clues and nobody has been arrested. It seems nothing happened in Bayelsa. It is really bad. Maybe the Inspector-General Police should intervene by sending a special force to crack this crime”, he said.

Two days after the incident, the kidnappers established contacts with Siasia’s family and demanded N70m to set the victims free.

Siasia, however, begged the kidnappers to set his aged mother free unconditionally saying he was out of job and had no such money to pay them.

But a family member said the kidnappers brought down the ransom from N70m to N50m without consideration to the health of the woman.

Residents and the Bayelsa State Chapter of the Sports Writers Association of Nigeria (SWAN) raised concerns on the whereabouts of Ogere.

Residents said it was a sign of incompetence on the part of the police and other security agencies to allow the 80-year-old woman to be in kidnappers’ den for over 25 days.

They lamented that the silence of the police and other security agencies was disturbing and asked the security commanders in the state to either free the woman or resign their positions.

Some of the residents derided the security architecture in the state for their lacklustre and alleged unserious attitude on the case of Siasia’s mother.

The Bayelsa State Chapter of SWA said it was disturbing that several weeks after her abduction, Ogere Siasia is still being held hostage by suspected kidnappers.

The Chairman of SWAN, Alambo Datonye said: “Nearly a month since the woman’s kidnap on July 15 at her country home at Odoni in Sagbama Local Government Area of the State, the old woman is still languishing in the hands of her abductors.

“This should not happen to anyone talkless of an aged mother of Coach Siasia who brought joy to millions of Nigerians and Bayelsans as a player and a tactician donning the national colors, bringing glory to the country.

“We therefore call on the kidnappers to release Madam Ogere Siasia unconditionally and reunite her with her loved ones.

“We also urge security agencies and government to act swiftly and efficiently to ensure the release of the woman and others that are being held against her will.

“No sane society develops with individuals held against their will, with the perpetrators of this unconscionable act getting away scot free.The pain and trauma the Siasia family is going through is better imagined than experienced.

“As concerned members of the society, SWAN in Bayelsa call on the relevant agencies to be alive to their responsibilities of safeguarding the lives of every citizen and bring to a halt criminal activities such as kidnapping which is antithetical to the very essence of our collective humanity”.
-TheNation
Top Stories