Some Benue pensioners have booed the state House of Assembly speaker as they protest the non-payment of their entitlements. 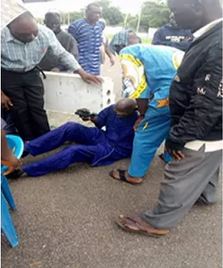 File photo: A penshioner collapses
According to NewTelegraph, there was pandemonium at the gate of the Benue State Government House in Makurdi on Monday, as pensioners in state, who are protesting against non-payment of their 25 months unpaid entitlements, booed the Speaker of the state House of Assembly, Hon. Titus Uba when he visited them to sympathize with them over their plight.

The retirees, whose protest entered day-six today, also gave Governor Samuel Ortom a condition for them to suspend their protest, insisting they must be paid at least six months out of the 25 months owed them.

The Speaker incurred the wrath of the pensioners when he said that: “Governor Samuel Ortom, as you all know him, will never do evil to his mothers and father’s” apparently referring to the pensioners.

The Speaker had said: “It is disheartening to see that you people are eating 2-3 days old cooked groundnut, but we as an Assembly cannot support anything evil against our fathers and mothers who are suffering here to press home their rightful entitlements. His Excellency, Governor Samuel Ortom as you all know him, will never do evil to fathers and mothers like you”.

It was at this point that the angry pensioners, who had been taken refuge at the gate of the seat of power since last week, booed the Speaker and chorused “all we are saying pay us our pension and gratuity”.
Top Stories