The long arm of the law has finally caught up with a man for defiling his 3-year-old daughter. 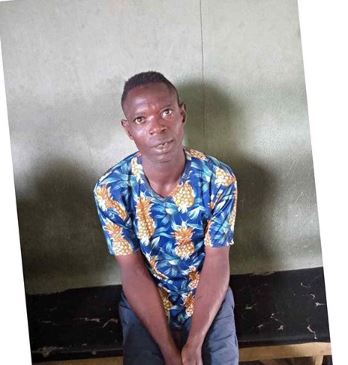 Chinedu Ifeleka
Chinedu Ifeleka, a 46-year-old man who lives at Mapowu street, Ojo, Lagos State has been arrested by the Nigerian Security and Civil Defense Corps for allegedly defiling his 14 year old daughter.
The state commandant of the Nigerian Security and Civil Defence Corps, Mr Cyprian Otoibhi, said Ifeleka, turned his daughter to a sex machine since when she was 11.
On why he abused his own daughter, the suspect claimed that his daughter goes out and does not comes back early, hence his curiosity over her virginity.
He owned up to having been checking his daughter by checking her panties and in the process was tempted to have sex with her, an action he blamed on the devil.
The wife of the suspect, Florence, 42, claimed the daughter told her the first time it happened, but said she never knew it would continue and was scared of the husband’s beating and that’s the reason why she reported to her sister, who is a member of NSCDC, to call him to order rather than jail him.
The daughter narrated her ordeal in the hands of her father but also pleaded for him not to be jailed, having promised not to try it again.
Top Stories