The Blues striker is one of a number of footballers abused over social media lately and revealed the impact it's had on his family. 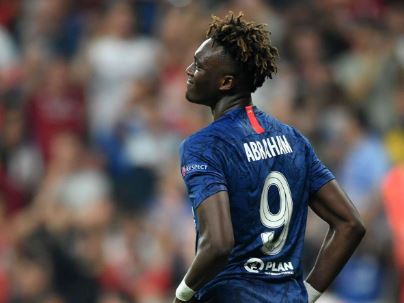 Tammy Abraham
Tammy Abraham has revealed his mother was brought to tears after recent racial abuse was directed at her son on social media.
After having his penalty saved in the Super Cup last month against Liverpool, Abraham was quickly subject to racially-fueled attacks online.
While the 21-year-old did his best to ignore the abuse, he admits his mother has struggled seeing his son subject to such treatment.
"I remember speaking to my mum, she was emotional, she was in tears," Abraham told CNN.
"You know, she's just thinking: 'Why him? Why him?' It's obviously not nice to hear, especially seeing your son getting abused.
"For me, I'm always a strong character, it doesn't affect me as much. But saying that, it could affect people who don't have my personality. It was a challenging moment for me, I went through a lot of emotions."
Racist abuse on social media has become a prominent issue this season with Manchester United duo Marcus Rashford and Paul Pogba also victims.
Abraham, who has gone on to score four goals for Chelsea this season, is shocked to see racism is still so visible.
"I thought it was long gone," he said. "Of course you're always going to get it now and then in certain countries but no, I didn't think it would be an issue in our day and age."
Having been criticised for his performance in the Super Cup final, Abraham has since shined in the league and revealed the support of his team-mates and manager has been crucial in allowing him to silence his critics.
"I had a lot of abuse but Frank Lampard always had his arm around my shoulder, lifted me up," Abraham said.
"Straight after, the boys, manager and everyone at Chelsea had my back. The next day, [Lampard] called me to find out how I was.
"He didn't want to go over the situation because he knew how I was feeling, but just wanted to find out how I was, make sure that I wasn't distracted from football and my personal life was all right.
"It's nice to have that support behind you when you're going through times like that."
Lampard's side currently sit 11th in the Premier League with just one win from their first four games and next face Wolves away on Saturday.
Check out Goal's Premier League 2019-20 fantasy football podcast for game tips, debate and rivalries.
Top Stories