A Nigerian soldier who is fighting Boko Haram has been arrested for armed robbery in a community in Anambra state. 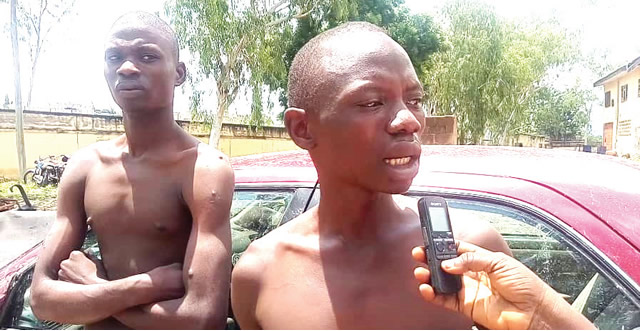 Hyellambamun and an accomplice
According to a report by Punch Metro, the Adamawa State Police Command, on Tuesday, confirmed the arrest of a serving soldier, Private Dampa Hyellambamun, for alleged armed robbery.

Until his arrest, the soldier was said to be stationed in Monguno, Borno State, where he was actively involved in counter-insurgency operations against Boko Haram terrorists.

He was said to be on military pass (permission to be absent from duty for a short period) from his base but was arrested with his military-issued AK-47 riffle for carjacking in Yola, the Adamawa State capital.

The suspect confessed to the crime, saying he had to rob in order not to starve to death.

Alleging neglect by the military authorities, he said he had yet to receive his salary and allowances from the Nigerian Army.

“I was given a gun without salary and allowances. What do you want me to do when I’m on the verge of starvation?” he asked.

Hyellambamun was apprehended alongside an accomplice, who is yet to be named.

The soldier is to face prosecution for using his military riffle to rob, an offence punishable by law.

Confirming the arrest, the state Police Public Relations Officer, DSP Sulaiman Nguroje, said, “The suspects accosted a lady along Target junction. They pointed a gun at her and asked her to surrender her car, a Toyota Camry, which she obliged.

“Luckily enough, the matter was reported to the nearby policemen on duty on Target junction, who swung into action in collaboration with vigilante members, and arrested the soldier.

“We were able to recover the snatched car, an AK-47 rifle and 35 rounds of ammunition from the Hyellambamun.”

He said the incident occurred around 1am on Tuesday.

It was gathered that Hyellambamun, an indigene of Hong in Adamawa State, got a pass to visit Yola before the incident.

The suspect also confessed that the pass expired since August 10, 2019; it remains unclear if his commanding officer granted him permission to travel with the riffle.
Top Stories