It was harrowing experience for some Nigerians who were airlifted from the OR Tambo Airport, Johannesburg. 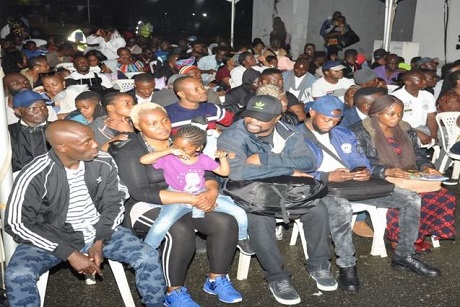 Nigerians waiting to be airlifted from South African airport

Over 187 Nigerians trapped by xenophobic attacks in South Africa arrived the Lagos Airport on Wednesday with tales of regret, lamentation on how they escaped being butchered.

The returnees who expressed mixed emotions on their return to their fatherland burst into tears as they alighted from the Air Peace Boeing 777 aircraft that flew them into Lagos.

They expressed their bitter experiences in the hands of South Africans.

The Chairman Nigerian Diaspora Commission, Mrs Abike Dabiri-Erewa informed returnees that the government had made available to them N40,000 recharge card to enable them communicate with their family members.

In appreciation of the gestures from the government, the returnees rose in euphoria to sing the national anthem.

An Osun State indigene who identified himself as Saheed, lamented how he was sacked from work for being a Nigerian.

He said having worked on Pretoria for over five years, he suffered discrimination.

Another returnee from Edo State, who identified himself as Anthony Joshua described his trauma in South Africa as unfortunate.

He called on government to sever ties with South Africa because of the maltreatment suffered by Nigerians.

Also speaking, Chairman of Air Peace, Allen Onyema said the offer to air lift Nigerians in trouble was the least he could do to assist.

He lamented how South African authorities delayed the flight for over 12 hours just to punish Nigerians.

In her remark, Mrs Abike Dabiri Erewa commended the airline for its patriotic act.

As at 10.45pm, the profiling of the returnees was ongoing by officials of Nigeria Immigration Service.
Top Stories