It was learnt that after the victim was stabbed by his assailants, he managed to walk out of his shop to a member's shop on the same street who took him to the hospital. 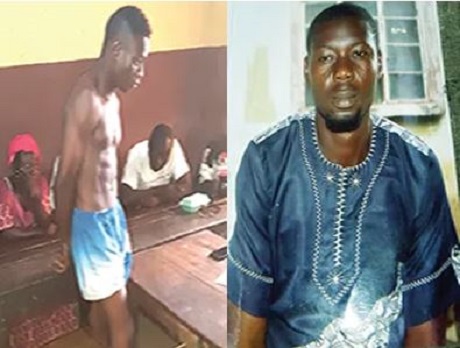 A 17-year-old apprentice, identified simply as Busayo, was accused of sending his cult members to kill the Isawo branch Chairman of the Nigeria Union of Tailors, Mr. Adetola Olarewaju, in Ikorodu area of Lagos State.

Olarewaju’s offence was that he beat Busayo for telling lies.

It was learnt that on September 3, 2019, the deceased went out with other members of the union to collect envelops they gave to their colleagues for financial assistance to support the union’s forthcoming anniversary.

But when Olarewaju and his colleagues got to Busayo’s master’s shop to collect the envelop, the suspect lied that his boss was not around.

However, while the late Olarewaju and colleagues were about to leave, Busayo’s master came out of the shop and told them that he was around. Annoyed, the deceased picked up a stick, beat Busayo and warned him not to lie again.

Olarewaju believed that beating Busayo as an apprentice was to teach him to be honest and upright. Unfortunately, he and other union members never knew that Busayo was bitter and was planning revenge.

Hours later, Busayo allegedly summoned two of his cult members from Itire in Surulere area of Lagos to come to Isawo to assist him to deal with the union chairman.  When they arrived at Isawo, the two suspects stayed in the shop of one of the graduated apprentices till 8p.m. before they went for their operation.

When the suspects were leaving Isawo after the operation, one of them stole a phone at Agric bus stop.

The Busayo’s colleague, who stole phone at Agric bus stop, was arrested and taken to the Isawo Police Station. Unknown to him, the person they stayed in his shop before they went to kill Olarewaju was at the police station with other union members.

Immediately he saw the suspect, he told elders of the union that the person arrested by the police was one of those who murdered Olarewaju. That was how he was arrested for murder.

The Secretary of the union, Mrs. Bukola Opeyemi, said that after the stressful work with the deceased, they all went back to their various shops, not knowing that death was hovering over their chairman.

She said: “We were planning to celebrate our anniversary in October. We decided to task ourselves by given each member an envelope to contribute money.

“On the fateful day of the incident, when we got to Busayo’s master’s shop to collect the envelope from him, we met Busayo and other apprentices. It was Busayo who told us that their master was not around.

“We were about to leave the shop when Busayo’s master came out of the shop and told us he was inside. That got our chairman angry and he picked up a stick to beat Busayo, but I persuaded him from beating him further and he stopped. That was how we left the shop and continued with what we were doing.

“We finished with the collection of the envelopes by 7p.m., I went home and Olarewaju went back to his shop at Number 12, Adegbuyi Street, off Olainukan, Isawo. Hours later, I received a phone call from someone that our chairman had been stabbed to death in his shop by unknown persons and that they had escaped.

“I immediately rushed to his shop. When I got there I was told he had been rushed to Ikorodu General Hospital by another member that was on the same street with him.”

New Telegraph learnt that after Olarewaju was stabbed by his assailants, he managed to walk out of his shop to a member’s shop on the same street who took him to the hospital.

“Unfortunately, that our member’s motorcycle’s head had been locked. He rushed to the junction to pick another bike. But before he came back, our chairman had slumped and died. Policemen from Isawo were informed about the incident and his body was evacuated to the mortuary,” Opeyemi added.

The Vice Chairman of the union, Comrade Yusuf Azeez, said when the incident occurred, he was in his shop.

According to him, when he received the phone call about the incident, he had to rush down to the scene, but a crowd had gathered.

Azeez said in order to avoid breakdown of law and order in the community, he directed members of the union in the area to report the matter to the police.

He said: “The following day, we the members assembled at the chairman’s shop to make arrangement on how to collect his remains at the mortuary for burial.

“Fortunately, when we got to the police station someone was brought in for stealing a phone at Agric bus stop. It was at the station that we were able to identify one of the suspects that partook in the killing of our chairman.

“Busayo’s parents were also arrested by the police when their son escaped from the community after the death of Olarewaju. The matter has been transferred to the Homicide Section of the State Criminal Investigation and Intelligence Department (SCIID) for further investigation. We are not going to relent; we have to get justice for our colleague who was killed.”

Another member of the union, Mr. Balogun Samsudeen, said he tried to save Olarewaju but unfortunately his motorcycle was locked.

He said: “came to my shop for assistance that I should take him to the hospital, but the blood gushing out of the parts of the bodies where he was stabbed was too much. I am surprised how he got the strength to walk to my shop. We have lost a generous man.

“He was born on September 14 and died on September 3. He had promised to throw an elaborate birthday for us on September 24 where all members of the association would gather during our meeting.”

The state Police Public Relations Officer (PPR), DSP Bala Elkana, confirmed that one person had been arrested in connection with Olarewaju’s murder.

Elkana, however, said the command was on the trail of other members of the gang still at large.
Top Stories