Following the outcome of the Presidential Tribunal's verdict, a supporter of President Buhari has barely escaped death in Delta state. 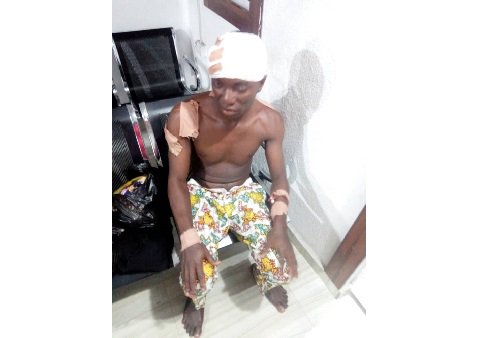 The victim
Political tension is rising in Delta crisis hotbed of Effurun, Uvwie local government area, following a life-threatening attack on a supporter of President Muhammadu Buhari over disagreement on the outcome of Wednesday’s Presidential Election Petition Tribunal ruling.
According to TheNation, the victim, identified as Omoiri Elvis, is on danger list after he was seriously stabbed on the head, neck and other parts with a wine bottle by a supporter of the Peoples Democratic Party (PDP) candidate.
A source, MC Paul, said on his Facebook post: “I have just received report of an attempted murder of Elvis Omoiri by a neighbor, Best Uduophori who runs a beer parlor in Okoloba, over a mere political argument.”
Various other sources told The Nation that trouble started when the duo disagreed over the outcome of the tribunal.
The pro-Buhari Omoiri insisted that the tribunal’s ruling was free and fair while his opponent maintained it was manipulated.
“Having defeated Best in the argument, Elvis felt the issue was settled.
“So he went out and came back to join other revelers at the former’s beer parlour. As music was playing and people were drinking, Best suddenly took a bottle of wine and broke it on his opponent’s head. He then went ahead to stab him many times on the head and neck.
“He continued to stab his victim until he slumped and fell from the chairs, while others at the scene fled for their dear lives,” an eyewitness said.
Confirming the report, Mr. Sebastian Agbefe, a friend of the victim said: “Best is on the run but Elvis is undergoing treatment in a nearby hospital.”
Agbefe told our reporter that the matter was reported at the Warri Area of Command, which has deployed policemen to the scene for investigation.
He informed the police team had met with the medical director of the hospital.
“Arrangement is being made to transfer him to the Delta State University Teaching Hospital, Oghara.
“We are very concerned about his health because the wounds are very bad.”
Our reporter learnt that Effurun, the home town of Minister of State for Niger Delta, Festus Keyamo (SAN) is a hotbed of political crisis.
There are concerns that the issue could escalate if not properly handled by political gladiators in the area.
There are concerns that associates of the victim are watching the development with keen interest due to suspicion that some politicians in the area might want to shield the suspect from justice.
Top Stories