A man has found himself in serious trouble after beating his wife to death in Ogun state. 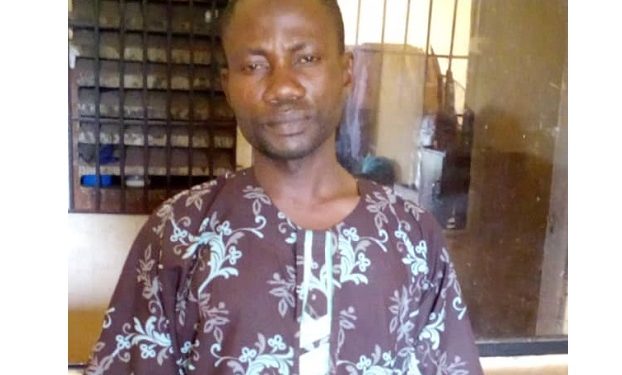 Kingsley Madukwe
A commercial motorcycle rider, Kingsley Madukwe has beaten his wife; Glory Madukwe, to death for refusing to breastfeed her crying one-month-old baby.
According to TheNation, the incident happened on Wednesday night at the Egando, Atan – Ota, area of Ogun State.
The traditional ruler (Baale) of the area, Chief Rafiu Gbadamosi reported it to the Police and it was learnt that the couple had a minor misunderstanding and in the ensuing disagreement, Ndukwe beat his wife to death at about 11:30 pm.
The Police Public Relations Officer, Abimbola Oyeyemi, who confirmed the incident and the arrest of the suspect in a release, stated that the Divisional Police Officer, Atan Ota Division, Salau Abiodun led detectives to effect arrest on the suspect.
Abimbola; a Deputy Superintendent of Police(DSP) added that the Commissioner of Police, Bashir Makama, has given directive for the transfer of the suspect to the Homicide Section of the State Criminal Investigation and intelligence Department.
“On interrogation, the suspect an Okada rider who is an indigene of Ihiala in Anambra State, stated that his late wife and mother of eight, was having a month old baby and that the baby was crying which made him to wake his wife up to breastfeed the baby, but she refused claiming that she was too tired to breastfeed the baby at that time.
“He stated that the victim got up and was going to the sitting room leaving the baby behind and this got him annoyed, consequent upon which he drew her back and gave her a hot slap. The woman then fell down and gave up the ghost.
“The corpse of the victim has been deposited at the General Hospital Ota mortuary for post mortem examination.”
Top Stories