A 20-year-old man has been apprehended by security operatives after he sexually assaulted and killed a woman in Oyo. 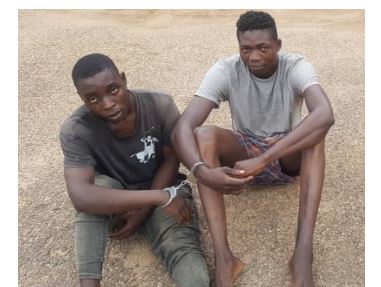 Gbolahan and his accomplice arrested by the police
Police officers in Oyo state have arrested a 20-year old man, Gbolahan Ismaila for allegedly raping and killing 35-year old Toyin Olubowale.
The state Commissioner of Police, Shina Olukolu, while parading the suspect, said Gbolahan killed the victim with a wooden stool after having sex with her forcibly.
“On 29th August, 2019 about 1400hrs, one Gbolahan Ismaila, age 20yrs boarded a commercial motorcycle ridden by one Joel Musa to No. 15 road 3 Ogidi Estate Ibadan. He alighted and entered the house of one Toyin Olubowale whom he sexually assaulted and subsequently smashed her head with a wooden stool which led to her death before he made away with her A32F Itel Android cell phone.
When the commercial motorcyclist returned him to Oju-Irin, Akobo Area of Ibadan, he noticed a wound and blood stains on one of Gbolahan’s fingers on the right hand and he became suspicious due to unusual sound he heard from the house while he was outside.
Hence, he went back to the house and met people crying over the death of the deceased. He thereafter informed the people that he knew the suspect who killed the deceased and that he brought him to the house earlier in the day. Hence, Joel Musa was promptly arrested and handed over to the police.” he said
When interrogated, Gbolahan confessed to the crime. Two other suspects, one Oyedeji Blessing ‘m’ age 22yrs who received the stolen phone and one Oyekola Mumini ‘m’ a GSM repairer, who assisted to flash and destroy evidence on the phone were arrested.
Gbolahan blamed the devil for his action.
“On that day, I went to her house, I had sex with her forcefully, and thereafter, I used a wooden stool to hit her in head and she died, it was the work of devil, I’ve initially went for her naming ceremony, and I have once toasted the woman, and she told me she will think of it, i don’t know what prompted me to kill her.”
Oyekola Mumini, a phone repairer who was arrested over the murder, said that he has nothing to do with the killing of the woman. According to him, he was arrested for wiping away details on the phone which was unknowing to him that it was a stolen phone.
“When the phone of the deceased woman was brought to me, I was told that the document of the phone has been lost, so told him (Ismail) to filled a form before I can wipe the phone unknown to me that the phone was a stolen phone, I was later arrested as an accomplices of the crime I didn’t know anything about.”
Top Stories