Karma: Thief Dies After Being Trapped Inside Church Where He Went To Steal (Photo)


A burglar has had his life cut short after he got trapped inside a church where he went to steal. 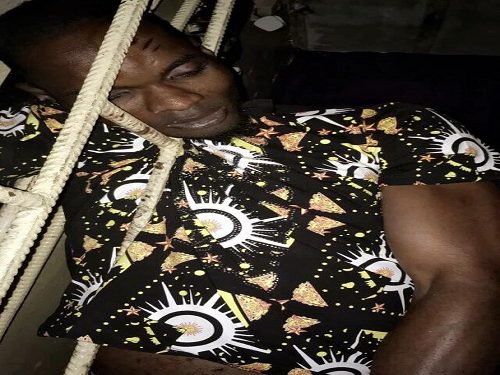 The suspect died after being trapped
A suspected burglar met his tragic end on Tuesday after he was trapped by burglar proofs at God’s Prestige Church, Arepo Street, Awori area of Abule Egba, Lagos.
According to TheNation, the church, had been burgled twice this year before the latest incident.
When The Nation visited the scene, the body of the unnamed robber was still trapped in between the burglar proof made of iron bars.
Sources said the robber must have gained access into the church on Monday night and got trapped before he could cart away items kept there.
“The first time the church was burgled early this year, the robbers carted away equipment such as keyboard among other music instruments.
“They came back a second time and stole electrical appliances, hence, the burglar proof was put in place by the church’s management.’’
Top Stories