A former minister of health has been arrested following accusations that the man had embezzled Ebola funds. 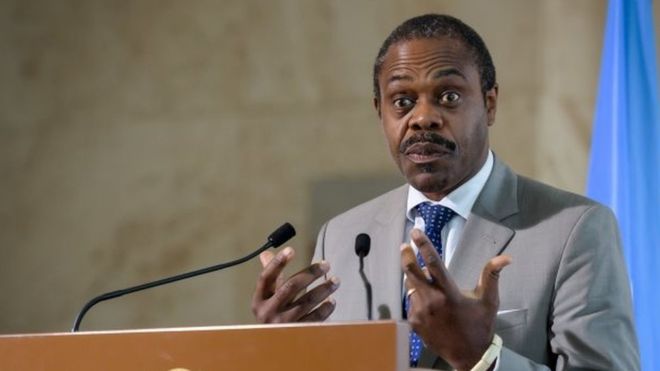 Oly Ilunga
Oly Ilunga, an ex DR Congo health minister has been arrested, reports have shown.
The man was arrested over allegations he embezzled public funds meant to tackle the Ebola epidemic, police said on Saturday.

According to the Agence France Presse, AFP, Ilunga, who resigned as health minister in July after being removed as head of the country’s Ebola response team, was detained while hiding in an apartment in the capital Kinshasa ahead of a bid to flee the country, officers said.

He is in custody due to “misdemeanours of the mismanagement of funds allocated to the Ebola response,” police spokesman Colonel Pierrot-Rombaut Mwanamputu told AFP.

Ilunga will be referred to prosecutors on Monday, he added.
It comes after Ilunga was questioned in August as part of an inquiry into the management of funds to fight the outbreak, which has claimed more than 2,000 lives since August 2018.

Ilunga, 59, had already been banned from leaving the country.

He stepped down after criticising plans by the UN’s World Health Organization to introduce a new, unlicensed vaccine to fight the epidemic.

His lawyer told AFP in September that some payments had been made to local chiefs after the killing of a WHO doctor in April.

More than 200,000 people have been vaccinated during DR Congo’s tenth and most serious Ebola epidemic.

It is the second-worst Ebola outbreak in history after more than 11,000 people were killed in Guinea, Sierra Leone and Liberia between 2014 and 2016.
Top Stories