John Mayaki reacts to the victory of President Muhammadu Buhari over Atiku Abubakar at the Presidential Elections Tribunal. 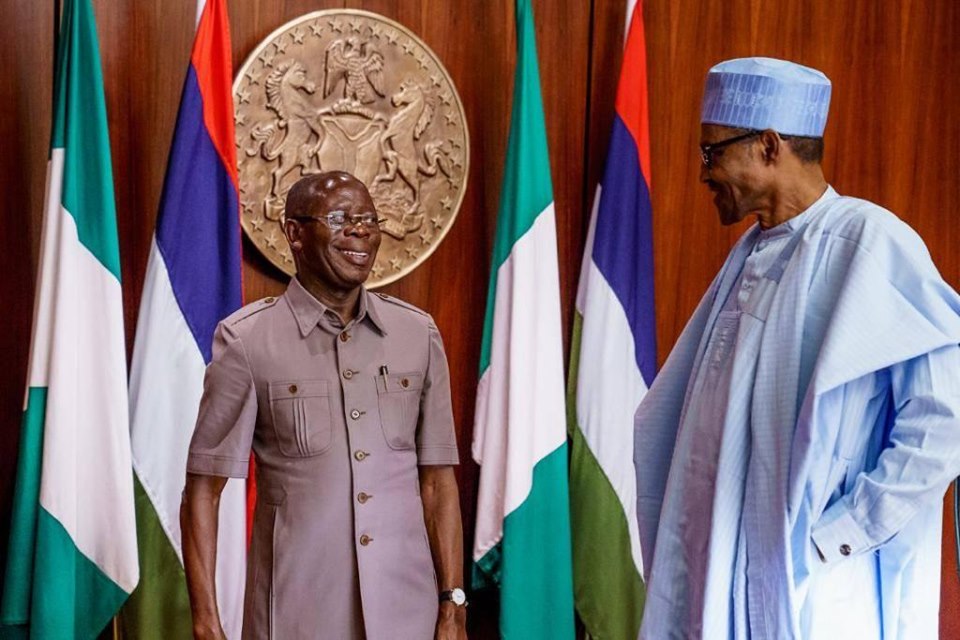 Oshiomhole and Buhari
That picture has gone public, the one you have seen, the one I have seen, but with many chances of us not unanimously understanding it. The President of Nigeria, Muhammad Buhari, shortly after the tribunal decision, was captured with the National Chairman of the All Progressives Congress, Comrade Adams Oshiomhole, sharing a peal of healthy laughter.

At the most basic significance, the portrait represents a fresh breath, a huge heaving of sigh after a tense, but avoidable, performance. First, it proves what a previous article once reported, on how people at the helm are robbed of the opportunity to bask in the moment's success, kept at their toes by an ever-lurking and snarling threat. But yesterday nevertheless was another success, a victory that more than a mere win, is actually a confirmation of what has been initially stated.

What the tribune outcome means however, is not just a confirmation of a prior victory, but a verification of the capacity of our judiciary who even in the face of overwhelming pressure applied through the insufferable subjection to bureaucracy, in the face of attempts to suffocate its reason, blackmailing its emotional intelligence by overwhelming drama, still stood its ground and delivered accurate justice.

Yesterday's outcome while marking a humongous victory for the President as his mandate is consolidated, for Oshiomhole whose visionary leadership is proved, and for APC whose progressive drive is once again licensed; rather, beyond all these worthy celebratory reasons, is in its best significance, the peoples' victory. This is because, at a very slim chance of backpedaling the country into the drudgery days of People's Democratic Party, into an era of blinding ideological darkness, maddening lawlessness, and heartbreaking planlessness, the tribune propelled the march of change and crusade against corruption to its higher gears.

Now the people, assured and confident in the aptitude of this government, can enter a humble braggadocio, expressing faith that with President Buhari's revamping manifesto, Nigeria can finally enter its promise land. And even though the exodus from the dreaded days of backwardness, corruption, and nepotism that characterized PDP's sixteen years in power, maybe long and tasking, the dawn of greatness already breaking at the end of the sojourn keeps our hope high, our spirits elated and our soul jumpy, in preparation of the excellence that awaits us at the other side.

Contrary to popular thinking, justice is not always soothing nor able to excite joy in everyone. For some people, yesterday may mark the end of any form of aspiration, permanently soaking them in despondence as they wear a mien of dejection, mourning, wailing and sinking in their one tears. But that is normal, that is what always happens at the end of evil's reign. A marauding beast, heinous in its brutal cannibalism of the public's fortune, will at the point of arrest and oblivion, cry its way to nothingness. But even while we feel for them, there is no more that can be done for them except granting them a time out of the spotlight where they can reflect upon their lives and pasts before coming back to politics—hopefully, repented and upgraded, able to play the new righteous politics of progress and development.

Ultimately, the competition is between the people and the President. He may think he is the happiest but that is false as we are happier than him in this victory even though he may not see our own smile and laughter. He may one time ago has said he belongs to everybody and to nobody, but that again, is a lie: he belongs to us and we belong to him.
***
Written by John Mayaki, ex-Chief Press Secretary to Governor Godwin Obaseki, a Diplomat, Historian, Strategist, Media and Communication Expert and Country Director, Coalition for Good Governance and Economic Justice in Africa