The story has been told of the yahoo boy who hacked his own aunt to death while the woman was sleeping in Ebonyi state. 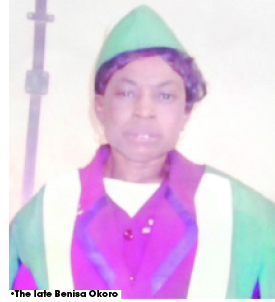 The entire Umuka community in Okposi, Ohaozara Local Government Area of Ebonyi State has been in mourning mood since August 19, this year, when news broke out that a man, Eric Ifeanyi Okoro, aged 28, hashacked his aunt, a hunched primary school teacher, Benisa Okoro, to death in her sleep.
Benisa’s absence would be felt more as schools reopen this week, by pupils of the community primary school in the area, where she was said to have been a kind of mother to all the children with her uncommon love and care to them.
The slain lady said to be about 52 years old had returned from a church programme tagged: ‘Night of Cry’ service, on August 18, but met her nephew, Ifeanyi absent at home. She was said to have quickly prepared dinner for the young man before going to bed for a night rest.
While she slept off, Ifeanyi, popularly known as ‘Yahoo Boy’, returned home in the wee hours, ate the food kept for him by his victim and took his jack-knife and stabbed her severally on the chest till she died in the pool of her blood.
According to a reliable family source, the suspect allegedly phoned his father, Mr Alfred Ogbonnaya Okoro in Owo, Ondo State and reportedly informed him that he had snuffed life out of “Auntie Benisa, and it remains one person for me to hit the gold, get rich quick and become self-actualized”.

The father in his disbelief ignored the information and went about his normal business the following day, being Sunday. “He had thought that his son might have made the phone call under the influence of alcohol or hard drug”, the family source said.
But the lid was blown off when the next morning, ‘Yahoo Boy’ as he is fondly called, went to the Okposi General Hospital morgue and called an ambulance van to carry the corpse of his aunt who died in his own hands to the mortuary. On arrival with the ambulance at his father’s compound, the van driver, Mr Ogbonnaya Okoro Ogudu had reportedly shuddered on seeing the corpse enmeshed in thick clot of blood and declined to convey Benisa’s body to the mortuary.
He instead pondered in bewilderment; asking the young man: “Who did this to your Auntie Eric? What happened to her? He then shouted on top of his voice alerting the entire neighbourhood who then rushed to the scene.
The first callers at the scene were jolted by the horrible sight, and spontaneously, they made distress call to leaders of the community who were in in a meeting at the community playground that fateful morning. Immediately, the community leaders adjourned their meeting and rushed to the home of Alfred Ogbonnaya Okoro to have first-hand information of the distress call.
Chairman, Umuka Community Development Union (UCDU), Mr Sunday Okorie Agwu, said that Eric did not deny being responsible, as according to him, he confessed and boasted that he had marked his father as his next target.
There and then, the community made calls and handed him over to the Divisional Police Headquarters at Obiozara; from where he was later transferred to the state Criminal Investigation Department (CID), Abakaliki.
“We, the chieftains of Umuka community have reached a decisive conclusion that should the police fail in their duty of bringing the self-confessed murderer to book, Eric can never return to this community to live and co-exist with us; the Umuka Ogwumaeze people any longer. He had been a security risk to the lives and peaceful coexistence of the people of this community since he reportedly attacked his father and attempted to kill him in Owo, Ondo State,” the community leader said.
Agwu who is also the head teacher of Umuka Community Primary School, Okposi, where Benisa was teaching before her gruesome murder described the victim as a kind teacher whom the school pupils were always very fond of before her untimely death.
“By the time the school is reopened to studies, her pupils will certainly miss her kind gestures and endeared patience at imparting knowledge and lessons to the children”, he added.
The community head, Chief Job Onuoha also bemoaned the gruesome stabbing to death of the teacher as terrifying, saying “the community has done what I think we should do in this regard; the murder of an innocent hard working disabled teacher by her own nephew leaves much than the mouth can say. Such barbaric act is unheard of in Okposi land, and we can’t fold our hands and watch him till he kills another person.

“We are bound to provide the police all necessary assistance to prosecute the suspect to serve as a deterrent measure to other bad eggs in Umuka community”.
Also, President, Umuka Youth Association (UYA), Nwanneka Ngada Okorie who spoke in Abakaliki, condemned the ugly incident and described the suspect as having “been consumed by his inordinate ambition to always have things done in his own way irrespective of whosoever his actions might affect”.
Okorie said: “Ifeanyi is a ‘Yahoo boy’, his father would have been his first victim, when he wanted to kill him the previous year and that was why he was brought home February last year to live with his very lovely and caring aunt; Benisa, whom he has stabbed to death. This is what you get with always wanting things come easy without working for it”.

He lamented that the community would have loved the immediate release of the corpse for burial, but wondered whether there was really need for autopsy since the suspect had confessed to the heinous crime.
“All our effort has been for the police to permit us to inter the remains of our sister, Benisa. You know, apart from my being the president of the youth in Umuka, I’m also part of the larger bereaved family, Benisa was a good loving sister who shouldn’t have been made to die in this wicked manner”, the youth leader said.
An indigene of the area told Sunday Sun that they were bewildered that while the community and the kindred family were raising funds to handle the calamity that befell them; Mr Alfred Okoro was making frantic effort to free his only son who killed his only sister, from police detention.
“Imaging Alfred was callous to inform us in the family that since he returned home resulting from the killing of Benisa, that he has been giving the sum of N2, 500 daily to his son to enable him bribe the police on duty at the SCID headquarters for him to be allowed to sleep behind the counter; instead of joining common criminals in the cell. We have seen that he is much concerned about bribing the police for his son to be released and freed from prosecution, than the death of his only sister”, the source said.
Several attempts for the father of the suspect to speak to our correspondent both at Abakaliki and Umuka, his village, were practically evaded.
In one of such occasions, he said via telephone: “You know, I’m not alone, and I am not also the only owner of Ifeanyi even though I am his father. Whom he was alleged to have killed was my only surviving sister who had been living with him since last year that I brought him home. I will call you immediately I am through with the family on the matter”.
Police Public Relations Officer of Ebonyi State command; Loveth Odah, a Deputy Superintendent of Police (DSP), who confirmed the incident said that the matter was being investigated and that the suspect will soon be charged to court.
Meanwhile, condemnations have trailed the gruesome murder of the soft-spoken physically challenged teacher.
Leader of the association of physically challenged persons in the area, Munonye Ogudu described the incident as barbaric, noting that this has further exposed the nature of violence that physically challenged persons faced in the country.
Similarly, Eziokposi High School Old Students Association (EHSOSA), Abakaliki Chapter, where Benisa was a member of the 1988 set, condemned the killing in its entirety.
A statement by Chairman of EHSOSA, Reuben Okorie, mourned the death of their member whom he said despite her physical challenge did not want to be a burden to her parents; hence, she struggled and carved a niche for herself through furthering her education, which gained her employment as a primary school teacher.
“It’s man’s inhumanity to man that Ms Benisa should be murdered for any reason whatsoever. We use this medium to implore relevant security agencies to investigate this heinous act, so that those found culpable will face the full weight of the law to serve as a deterrent to others, who may think of committing such atrocity,” the old students stated.
Okoro was a holder of Bachelor of Education (B.Ed.) in Education Foundation.
***
Via Sun News
Top Stories