Officials of LASEMA, LASTMA, men of the Rapid Response Squad and policemen from the state command were said to have responded to the incident. 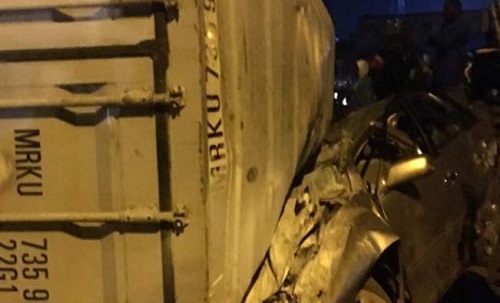 Tragedy struck at the Agric end of Ikorodu Road, Lagos State, on Sunday after a truck driver lost control and the 20-foot container he was carrying fell on a Toyota Camry.

Two motorcycle riders and their passengers were said to have also been trapped.

While two persons have so far been confirmed dead, five were reportedly seriously injured in the accident which occurred on Sunday night.

Also affected was a patrol vehicle belonging to the RRS.

Officials of the Lagos State Emergency Management Agency, Lagos State Traffic Management Authority, men of the Rapid Response Squad and policemen from the state command were said to have responded to the incident.

The spokesperson for LASEMA, Nosa Okunbor, who spoke for the Director-General of the agency, Dr Femi Oke-Osanyintolu, confirmed the incident.

He said, “On getting to the scene of the incident, it was discovered that a truck ladened with a 20-foot container with number plate, LSD-611 XU, a Toyota Camry with number plate, FKJ-732 FS, and two motorcycles were involved in an accident.

“Further investigation gathered at the scene revealed that the truck lost control and ran into the Toyota Camry and the motorcycles.

“Unfortunately, two adult males lost their lives, while three others sustained injuries and had been rushed to an unknown hospital before the arrival of the LRT.”

“LRU, LASAMBUS, LASTMA and other emergency responders are ground, rescue operation is ongoing right now,” he told our correspondent around 11.30pm on Sunday.

The PUNCH learnt that the driver of the truck had been involved in a crash earlier and refused to stop.

Some motorcycle riders were said to have given him a chase as he sped on, hoping to escape.

“That was when he lost control and the accident happened. Two people were confirmed dead on the spot and five sustained serious injuries,” a credible police source said.
Top Stories