A personnel of the Nigerian Prisons alongside his gang members have been apprehended for engaging in fraud. 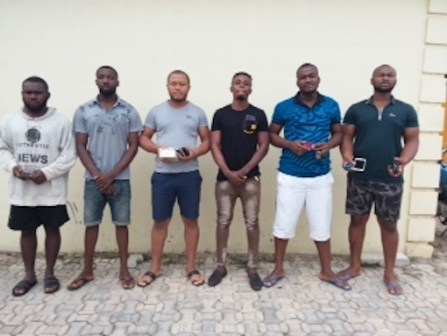 The suspects
Operatives of the Kaduna Zonal Office of the Economic and Financial Crimes Commission, EFCC have arrested six fraudsters who specialize in defrauding innocent Nigerians by using bank details obtained through sim swaps and Automated Teller Machines (ATM).
The suspects include Urulo Ikenna Henry, an inspector with the Enugu Command of Nigerian Correctional Service. Others are Ugonna Nelson Owete, Ugonna Samuel Okafor Obinna, Chigbo Paschal Chidiebere, Oha Chukwujekwu Kingsley, Ahamefula Francis Izuchukwu
The suspects were arrested in separate operations, sequel to a petition by a customer of Access Bank, alleging that monies were illegally transferred from his account without his authorisation.
According to the petitioner, sometime in February, 2019, he opened an account with Diamond Bank (now Access Bank) which he funded to the tune of N5m and instructed the bank to open a fixed deposit account, with the sum of N1m from the earlier account, as opening balance.
The complainant said he was receiving regular alerts until the end of March, 2019 when the alerts stopped coming, prompting him to demand his statement of account from the bank. Upon receipt of his bank statement, he discovered to his chagrin that the sum of two million nine hundred and eleven thousand four hundred and eighty naira (N2,911,480m) had fraudulently been transferred to several accounts between April 5 -9, 2019 without his authorisation..
Upon the receipt of the petition, the zonal office of the Commission immediately swung into action and traced some of the funds to three of the suspects, Samuel Okafor Obinna – N1,500.000; Chigbo Paschal Chidiebere -N210,000 and Oha Chukwujekwu Kingsley N300 000. All three were promptly arrested.
Further investigation revealed that Ikenna Henry, Nelson Owete (a known criminal who was earlier arrested and paraded by the Enugu State Police Command for crimes bordering on conspiracy and armed robbery) and Ahamefula Francis Izuchukwu were equally complicit in the fraud.
They were arrested. Upon arrest, items recovered from Urulo Ikenna Henry included a Toyota Camry, documents of 2 plots of land, 2 Nigeria Housing Fund Passbook (one belonging to him and the other bearing Ani Wilfred Ochechukwu), 17 ATM cards of different banks bearing different names, 2 Nigerian Correctional Service Identity Cards, 2 smart phones and 2 Nokia phones, 1 NHIS card, 1 voter card, 26 Starter Packs and 15 SIM cards of various networks.
Two sachets of Cannabis Sativa, 8 ATM cards bearing different names and banks, 6 Starter Packs, and 4 SIM cards of various networks, One empty ECOWAS Passport, 1 NDA dependant ID card and a voter card were also recovered from Francis Izuchukwu
The suspects will soon be charged to court as soon as investigations are concluded.
See more photos below: 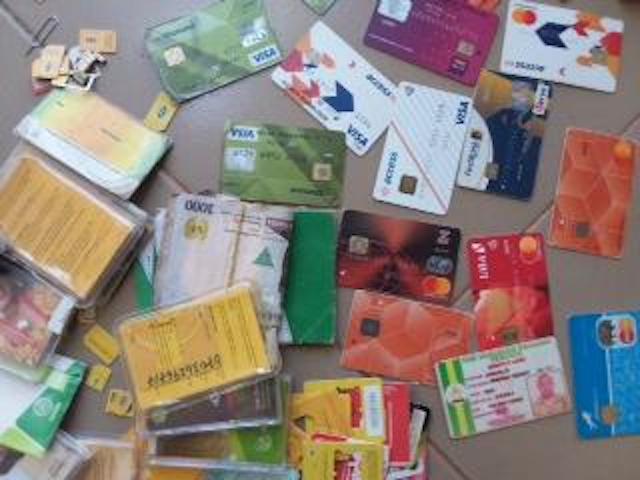 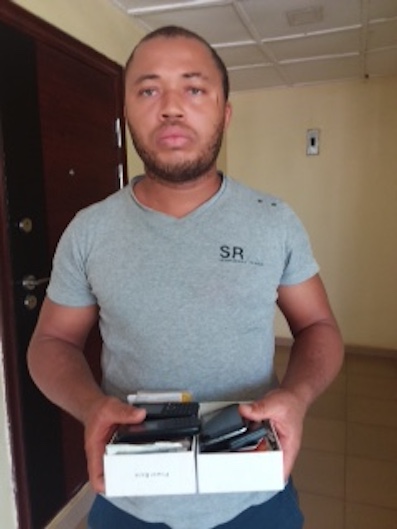