Police officers have been caught on camera saving a man about to kill himself by jumping off a bridge. 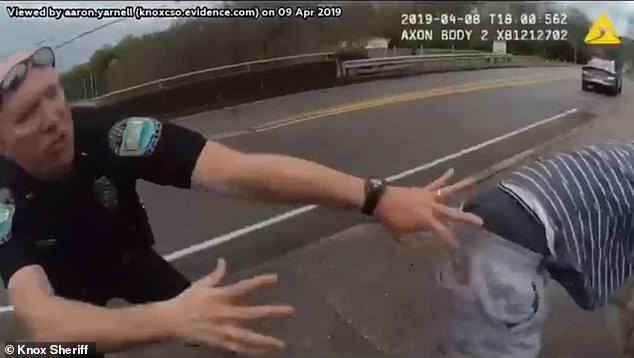 The Knox County Sheriff's Office posted the heroic save from April 8 on their Facebook page Monday and praised their very own TANGO Traffic Unit Deputy Brian Rehg.

The Facebook captions says: 'Officer Rehg along with KPD Lt. Chris McCarter grabbed and held onto the young man just seconds before he went over the bridge. Because of their vigilance and quick actions the young man is alive today.'

In the video, the two authorities are standing with an unidentified young man near a bridge on Pleasant Ridge Road.
Seconds later, Deputy Rehg's bodycam camera captures the scary moment the young man attempts to lunge over the bridge's railing.

Deputy Rehg and Lt. McCarter quickly jump into action, barely grabbing onto the man's leg as he struggles against the officers' grasp.

They manage to pull the man back over the railing and place him on the ground before he could get hurt.
According to the post, the young man received help after the incident.

'Both Lt. McCarter and Officer Rehg are true local heroes, not just because of this one incident but because they continue to risk their lives daily for the safety of others,' the post read.

One user wrote: 'My heart almost stopped. Such quick action by this Officer saved this young man’s life. The Officer very well could have been pulled over himself. You are a hero.'

Another wrote: 'Courageous officer who acted with quickly saving a victim and a family from sorrow and grief. Exemplary action, thank you for your service.'

The video has more than 1,000 reactions and nearly 500 shares.
Watch the video below:
***
Source: Daily Mail UK
Top Stories