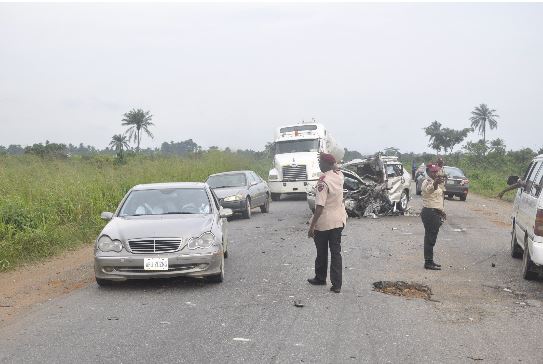 File Photo
At least, five persons have died in an accident involving a commercial bus in Ogun State on Friday, DAILY POST reports.
Eyewitness account has it that the bus had skidded off one side of the road, summersaulted and went up in flames, killing five persons.
The accident reportedly occurred at Onigaari axis of Lagos/Ibadan Expressway, Ogun State.
The Ogun State Traffic Compliance and Enforcement (TRACE) corps confirmed the incident.
TRACE Spokesperson, Cdr Babatunde Akinbiyi, said the five victims were burnt beyond recognition.
Akinbiyi informed that the victims had been taken to Olabisi Onabanjo University Teaching Hospital (OOUTH) morgue in Sagamu.
“We are still gathering information on victims rescued before our arrival.” he said.
Top Stories