Sources said the driver of the bus lost control of the vehicle while speeding and it somersaulted several times. 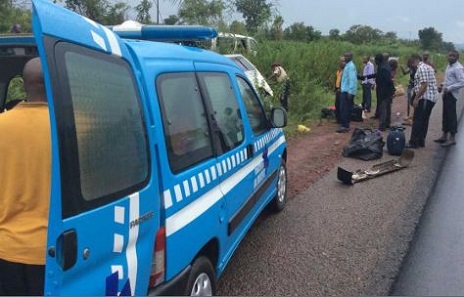 No fewer than five persons said to be wedding guests reportedly died on Saturday evening in a road accident along Ado-Ikere Road in Ekiti State.

The accident involved an 18-seater bus belonging to Ekiti State Market Women, which was reportedly conveying some guests from a wedding reception when the accident occurred.

While three of the occupants were said to have died on the spot, sources said that two among the injured persons earlier rushed to Ekiti State University Teaching Hospital, Ado Ekiti for medical attention died from the injuries they sustained.

Sources said the driver of the bus lost control of the vehicle while speeding and it somersaulted several times.

A source said, “The injured occupants of the vehicle have been taken to hospital for medical attention while the remains of the three dead persons have also been evacuated to the morgue.

A source at the EKSUTH said, “Two of the injured occupants rushed for medical attention had died.”