The mad man went ahead to accuse Ikpeazu of mismanagement of state funds that could have been used to mitigate the infrastructural decay in the state. 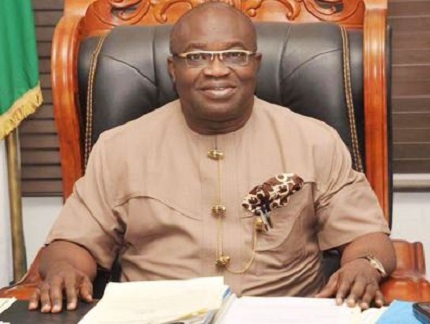 Governor Okezie Ikpeazu
The last has not been heard about the madness going on Abia State, following the blunt attack on the state government by a ‘mad man’, at the Eke-Oha Market (Shopping Centre).

The video of the mad man’s verbal attack on Governor Okezie Ikpeazu and the Speaker of Abia State House of Assembly, Hon. Chinedum Orji, which has gone viral was obtained by Sunday Telegraph with his words in exact.

In the video, the mad man, to the cheering of crowd at the market, accused the Abia Speaker of lording over Ikpeazu and controlling him with serious political pressure.

The mad man went ahead to accuse Ikpeazu of mismanagement of state funds that could have been used to mitigate the infrastructural decay in the state.

In the words of the mad man: “Okezie Ikpeazu, what have we done to you? Whenever it rains, we have hypertension. In Ariaria the so called International Market whenever there’s rainfall, Ariaria overflows with flood.

“Okezie Ikpeazu come and explain the money you spent on Faulks Road which is still flooding and killing people whenever it rains.

“Okezie Ikpeazu, why are you frustrating us? Did we offend you by electing you as our governor? Okezie Ikpeazu, you were once a Chairman of the Abia State Environmental Protection Agency (ASEPA), but Aba is the dirtiest city in Nigeria.

“Okezie Ikpeazu, your cup is overflowing. Leave Government House for us. You and Ikuku (Hon. Chinedum Orji, Speaker Abia State House of Assembly) will soon meet your Waterloo.

“Ikuku is carrying Ikpeazu on his back pressurizing him seriously.

“I’m interested in Aba because Aba is our commercial nerve centre. Okezie Ikpeazu, we’re going to impeach you. I’m standing at Shopping Centre and speaking so that the whole world will hear me.”

Just two days after the video of the mad man’s verbal attack went viral in the state and beyond, a new video emerged where the same mad man was said to have been arrested and had started making confessional statements.

In this particular video, the mad man was being interrogated by some unseen faces alleged to be police officers in an office also alleged to be the office of the Chairman of Eke-Oha Market, Mr. Friday Dimiri.

The mad man went ahead to mention some names of notable traders in the market and linked them to the 2019 governorship candidate of the All Progressive Grand Alliance (APGA), Dr. Alex Otti.

The mad man mentioned the following names: Jude Osuagwu, Innocent Anosike, Ugochukwu Oriaku, Chima Onuoha and one Augusta, stressing that they were all agents of Otti who offered him N10,000 to come into the market and carry out the verbal attack on the state government.

Those whose names were mentioned by the mad man in his second video called a press conference where they denied all the allegations against them as published by New Telegraph some days ago.
Top Stories