The Commander General Kano State Hisbah Board Sheik Haroon Muhammad Sani ibn Sina disclosed that the board had succeeded in preventing selling and drinking of alcohol. 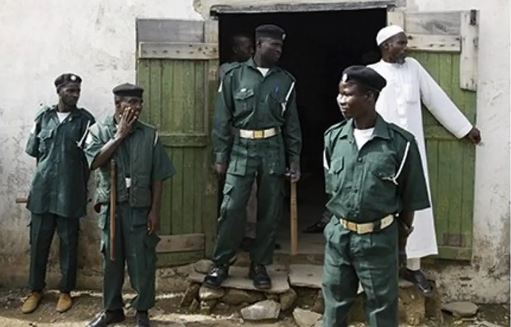 File Photo: Hisbah
In an effort to discharge one of its statutory responsibilities of encouraging what is good and forbidding what is haram, Kano State Hisbah Board has destroyed over 196,400 bottles of alcohol.
Speaking shortly after flagging off the destruction exercise at Kalemawa in Dawakin Tofa Local Government Area, Kano State Governor Dr. Abdullahi Umar Ganduje, said Islam has strongly condemned drinking of acohol and all other intoxicants that can distort mental capability of a person.
“In Islam, drinking of alcohol is strongly forbidden being one of the backbones of committing sins either big or small and that has been stated out at several places in the Holy Qur’an.
“Our Islamic scholars, religious and community leaders should join hands together in the crusade against such social vices because issue of taking alcohol is not only Islam that forbids it, to good Christian, consuming alcohol is also prohibited,” he said.
The Governor represented by his Deputy, Dr. Nasiru Yusuf Gawuna, assured that all other shari’a agencies in the State would enjoy similar promotion and support with State Hisbah Biard to enable them discharge their mandates.
He said “This Government is a Shari’a compliant Government. We will continue to support the Hisbah Board more especially as we witnessed the launched of New Hisbah Commanders of all the 44 Local Government Areas and also witnessed the rebranding and taking the State Hisbah Board to the next level.”
Ganduje, therefore, implored people in the Smstate to accord the needed support and cooperation to the officials of the Hisbah Board, pointing out that, “giving them all the supports to discharge their duties will not only promote their work but ensure that our society become free from evil social acts.”
In his remarks, the Commander General Kano State Hisbah Board Sheik Haroon Muhammad Sani ibn Sina disclosed that the board had succeeded in preventing selling and drinking of alcohol under the provision of penal Court section (401) of 2013 shari’a law in Kano.
According to him, the board has got court order under this section to destroy over 12 tippers of alcohol confiscated while trying to bring them in to the state which are meant to distort the life of the teaming youth.
“It is against this background, I call upon the suppliers and those that consume the alcohol to shun away from this act as Hisbah Board will not relent on its effort to fish out the perpetrators and take them to court at any given time for prosecutions ” he assured.
Earlier, the Assistant Commander General Hisbah Board Malam Idris M. Umar, quoted several verses from the Holy Qur’an that prohibit the selling and drinking of alcohol as well as its implication to human life.
Top Stories