Police in Ekiti State picked up Mercy Momoh accusing her of stealing a two-month-old baby in Ado-Ekiti, the state capital. 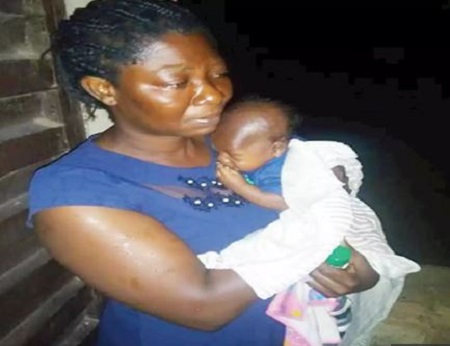 Mrs Mercy Momoh
A 39-year-old woman, Mrs Mercy Momoh, who allegedly stole a two-month-old baby from the mother, Mrs Funmilayo Sunday, at the Ekiti State Secretariat, Ado Ekiti on Friday, has been arrested while attempting to escape with the infant.

Sources said the woman was apprehended on Saturday at Odo Aremu, Oke Ori Omi area of Ado Ekiti, and taken to the police station alongside the baby.

A source said upon investigation, “The woman claimed that she hails from Benin, Edo State, but resides in Lagos. She said that she stole the baby, because she was in dire need of a male child.

“She claimed that due to her inability to bear a male child, her husband married another wife and might send her packing.”

Momoh was alleged to have tricked the nursing mother to the state secretariat on Friday, on the pretext of assisting her to benefit from the relief materials being distributed by the state government to flood victims.

The nursing mother and trader in soup ingredients had while narrating her ordeal, alleged that the abductor had, before that day, been patronising her consistently at the Oja-Oba Market in the state capital.

Sunday stated, “The woman (Momoh), who had become a regular customer, invited me to the secretariat so that her husband, whom she claimed, was working there, would facilitate how I would get some of the relief materials. At the secretariat, she pretended to be waiting for someone, having entered some offices on the pretext of making arrangements for me.

“She later collected my baby and phone from me and asked me to go and buy recharge cards for her and before I returned, she had disappeared with my baby.”

The state Police Public Relations Officer, Caleb Ikechukwu, who confirmed the suspect’s arrest to journalists in Ado Ekiti on Sunday, said, “Investigation is still on going to unravel the exact situation in order to reveal what really transpired.

“It is confirmed that the woman, who stole a two-month-old baby, has been arrested by the operatives of the Ekiti State Police Command.

“The suspect is Mercy Momoh, a 39-year-old woman from Edo State. She was apprehended through intelligence made available to the police and will be prosecuted after the conclusion of investigation.

“The Nigeria Police will no longer reveal to the public the means through which arrest of criminals is effected, because these days, criminals take advantage of such information.

“Acting on information on how they can be arrested, they now devise other means of carrying out their nefarious acts without being arrested.

“All I can tell you is that the woman, who stole the infant, has been arrested through intelligence gathering and investigation is still ongoing

“We call on members of the public to be careful when dealing with strangers. The suspect was apparently nice to the victim; that was why she got the baby easily. Citizens should not be carried away by kind strangers.”
Top Stories

EFCC Recovers $20m Worth Of Cryptocurrency From Fraudsters
Recent Stories