The Brazilian goalkeeper hopes to be back between the sticks soon after being forced to miss the start to the 2019-20 season with a calf issue. 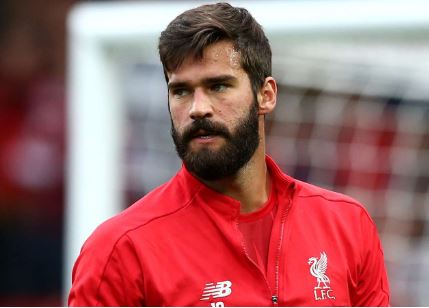 Alisson
Liverpool goalkeeper Alisson claims he has taken a "massive" step forward with his recovery from injury and is hoping to return to the pitch as soon as possible.
The 26-year-old has been out of action since limping out of the Reds' 4-1 win over Norwich City on August 9, with summer signing Adrian drafted in as his replacement.
Alisson has had to watch from the sidelines as Liverpool have stormed to the top of the Premier League table with a 100% record, beating the likes of Chelsea and Arsenal along the way.
Adrian has received plenty of plaudits during that time, but Jurgen Klopp's men haven't looked quite as strong at the back without their Brazilian No.1 commanding the box.
Speaking ahead of Liverpool's Carabao Cup third-round clash at MK Dons on Wednesday, Alisson has delivered a positive update regarding his rehabilitation.
“I’m on a good way, I think we are nearly there,” He told the club's official website.
“I can go outside to the pitch to do some goalkeeper work and I feel very well. I feel confident and I think now it’s just about getting all my power, all my confidence to come back and do what I love to do.”
Alisson went on to express his relief after returning to light training outside the gym, adding: "It’s massive because if I look back, two weeks ago I couldn’t even walk properly. Now I’m running, jumping on my right leg that was injured so I’m really happy for that.
“It’s great. When you are a player you want to have the contact with the ball, with the guys on the pitch, the routine of training. It’s what I love to do.
“The games, the atmosphere at Anfield, the away games, all games when I watch on the TV, I just think how I want to play, I want to be there, I want to help my team-mates. I’m looking forward [to being back], I can’t wait anymore!”
Liverpool already hold a five-point lead over reigning champions Manchester City at the Premier League summit, with another thrilling title race now on the cards.
Klopp's men suffered a 2-0 loss in their Champions League opener against Napoli last week, but bounced back quickly with a 2-1 win over Chelsea at Stamford Bridge on Sunday.
Alisson reserved special praise for Adrian, whom he believes has already "shown his value" during his short time at Anfield.
“I think the boys are doing very well, all the team [and] Adrian especially,” Alisson continued.
“He’s a special guy who came late in the season, he just came and shows everyone his value, not just as a player but as a person and that is the more important thing. He is doing very well on the pitch. I have peace to recover in a proper way so it’s better for everyone.
“You can see that [he has settled in well] on the pitch, you know a player just can play as he is playing if you are set up with the place, with the people, if you are happy here and you can see he is very happy here.
“He helped us to win a title already, he is helping us a lot in the games to win points. That is the most important thing for us in the season to achieve our goals.”
Top Stories