The ex-Super Eagles striker discloses he has no desire to hang up his boots just yet and has set his sights on joining a club soon. 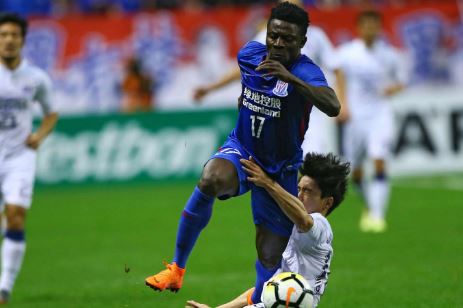 Obafemi Martins
Former Inter Milan and Newcastle striker Obafemi Martins reveals he has no immediate plans to retire.
The 34-year-old was tipped to quit football in 2018 after a hamstring injury ended his time at Shanghai Shenhua. However, ‘Obagoal’ feels he still has plenty to offer football.
Martins, who won two Coppa Italia titles, one Serie A, one English Football League Cup and was named Caf's Most Promising Talent of the Year twice, won the 2007 Chinese FA Cup topscorer prize and aims to join a new club soon.
“After my career-threatening injury in China, many people advised me to quit but I told myself I still have a lot to offer the beautiful game,” he told Goal.
“Football is my life; I eat, drink and sleep football so I don’t see any reason to call time on something that makes me happy.
“I’m 34 but I feel like a teenager, and with this sensation, I can still play for any big team across the world. I’m thankful for what I have achieved in football but I thirst for more.
“That desire is still there, the desire to score more goals and win more titles. For my next move, I have got offers from the United States, China and Saudi Arabia but I will only move when I see the right bargain.”
After featuring for Reggiana and Inter Milan in Italy, Martins joined Newcastle United in 2006 and helped them win Uefa’s Intertoto Cup in the same season.
The pint-sized forward also represented Wolfsburg, Rubin Kazan, Birmingham City, Levante and Seattle Sounders FC before moving to the Chinese top-flight where he got 32 goals and nine assists in 59 outings.
Martins scored 35 goals in his three seasons with the Magpies, later joining Birmingham City on loan in 2011.
On the international scene, he is among the exclusive ranks of Super Eagles’ players who got a goal on their maiden appearance for the senior national team having scored on May 29, 2004 against the Republic of Ireland.
Before drawing the curtains on his Nigeria career, he boasted 18 goals from 42 outings.
Top Stories